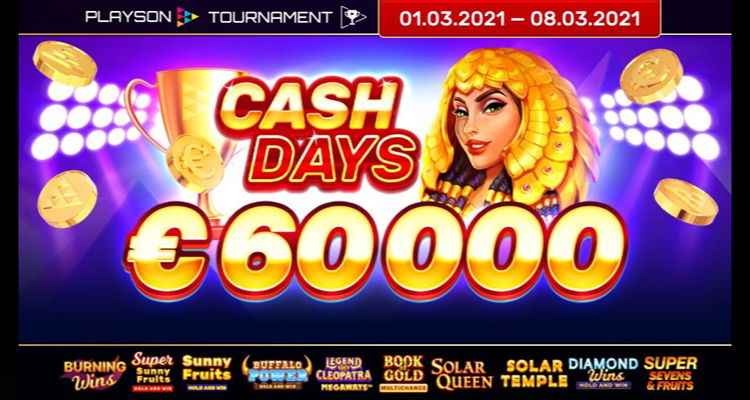 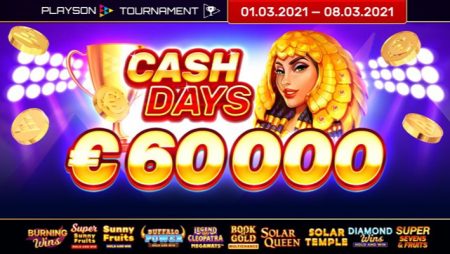 After giving away a February prize pot worth €50,000, Maltese-based online casino software developer Playson has now revealed the next exciting edition of its CashDays network slots tournament.

The March installment will be lighting up player’s screens from the 1st – 8th of the month when 350 lucky winners will share a prize pool worth a whopping €60,000 and the first place participant will net the mouth-watering top prize of €10,000!

Much like all of the CashDays tournaments, qualifying points are calculated on a round-by-round basis, with every €1 (or the currency equivalent) that is won equaling 10 points; so winning €10 would represent 100 points.

Last month, Playson’s Hot Reels network tournament featured a prize pot worth €50,000. The action took place from February 15-21 and 250 lucky winners split the “spoils of victory, while €10,000 was netted by the top participant whose final score of 2 302 336 points was more than enough to seal the deal.

To qualify in the February tournament, players were required to place a minimum bet of €0.5, and again, points were granted on a round-by-round basis, with each multiple of the amassed bet won by a player equaling 10 points.

In other exciting news, Playson is celebrating the 5-year anniversary of its content partnership with Isle of Man-based software company Microgaming via its Quickfire platform. Developed to help improve browser-based play for internet casinos, Quickfire has transformed into one of the industry’s premier “instant-play” gaming platforms.

More about:  Olympic Entertainment Group scores exclusive partnership deal with NBA for “bubble” season and beyond

The long-standing collaboration began back in February 2016 and currently sees 73 of Playson’s games available to the more than 800 leading online gaming brands, such as Mr Green, LeoVegas, William Hill, Casumo, and UK-facing site, ComeOn!, on the UK company’s award-winning platform.

Playson kicked off the month with content deals with Belarusian gaming company, GrandCasino, which includes  5 Super Sevens & Fruits: 6 reels and Diamond Wins: Hold and Win, each of which is a hit from the developer’s popular Timeless Fruit Slots portfolio.

Also included in the agreement is the online slots specialists range of integration-free engagement tools, such as regular Network Tournaments, which features in-game leaderboard, easy set-up, support of multiple games, and network capability across several operators; Feature Trigger, offering flexible set-up, is easy to configure, good for reactivating players and retention, and control of marketing costs; and Extra Spins.

Following that deal, Playson made further gains in expanding its European footprint via Greece’s leading gametech company, Kaizen Gaming. The deal sees the developer’s entire games suite launch with the Athens headquartered firm‘s well-known brands in the southeastern European country along with the other five countries it currently operates in, including Cyprus, Germany, Romania, Portugal, and Brazil, soon after.

FinXP Partners with CashtoCode
46 mins ago

XB Systems AG Releases Q1 Trading Update and LOI with Galaxy Group
47 mins ago
Recent Comments
Categories
Recent Posts
18+
Gambling News from NewsCasinoNew.com is made for the most passionate fans of online casinos and internet gambling. We cover everything: from popular gambling world events and trends to new casino slot game releases and reviews, you will find the latest news stories.