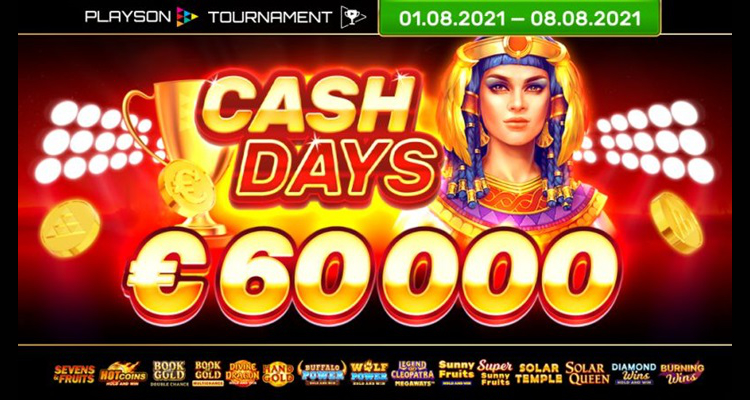 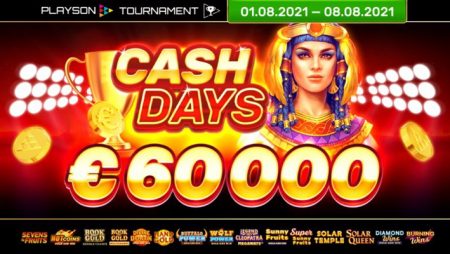 Malta-based online casino software developer Playson has announced a tantalizing prize pool worth €60,000 by way of the August edition of its wildly popular CashDays tournament that will incorporate 15 of the international brand’s hit slots.

With the weather continuing to heat up this month, it is only appropriate that the slots tournament scene follows suit and this supplier of cutting-edge innovative content does its very best to make August scorching hot for players!

The famed competition kicks off on August 1st and wraps up on August 8th and will see an incredible €60,000 prize pool up for grabs, with the top-scoring participant walking away with a sizzling €10,000.

To qualify for the exciting competition, players are required to place a minimum bet of €0.5. Points are tabulated per round with each €1 that is won being equal to 10 points, e.g., €10 won represents 100 points.

The following hit titles; a mix of Hold and Win, Megaways, fruit slots and more, from the global brand will be incorporated into the competition:

Meanwhile, the casino games and software developer recently launched its latest title, Hand of Gold, which takes players back in time to Ancient Greece.

The new addition to Playson’s 70+ omni-channel titles slots portfolio is packed with exciting additions such as the Golden Touch feature which players are guaranteed to experience during extra spins, exceptional graphics and immersive soundtrack, all of which make for a memorable playing experience.

A 6-reel, 4-row, 20 paylines slot, the game also features the golden hand symbol which provides massive win potential by triggering the Golden Touch feature where one of the symbols is randomly selected, turning matching symbols into Wilds. On a single spin, up to six Hand of Gold symbols could possibly land on the reels, potentially leading to the discovery of a collection of Ancient Greek treasures.

More about:  Skulls Up! Slot Review (Quickspin) — Most Awaited Slot Game of January

Aiding in that goal, landing at least three Bonus symbols awards 10 extra spins with the possibility of reactivating, During each one of the spins, the game’s key feature is guaranteed…

…at least one of the Hand of Gold symbols will appear in a random position on the reels, with the possibility of up to six landing.

The latest slot follows a series of innovative games and tools introduced by Playson in 2021, including the trademarked Double Hit mechanic created especially for the key, newly regulated iGaming market of Germany.