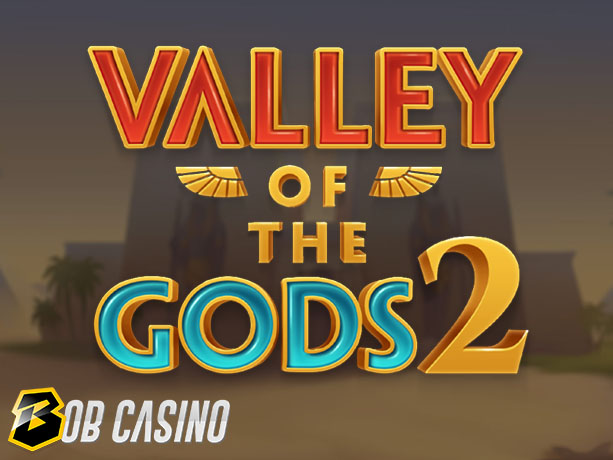 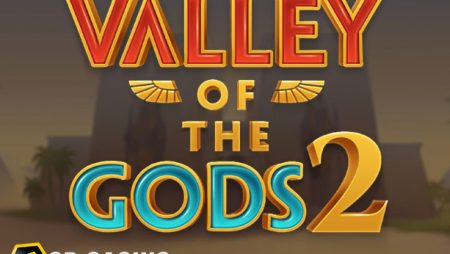 If ever a game was made to cash the thrills, this is it!

Malta-based Yggdrasil heads back to the desert beyond the Nile River Valley to bring you the sequel to one of their flagship releases, Valley of the Gods. As expected from a sequel hailing from an industry giant, there are noticeable improvements, feature-wise, aimed at delivering more excitement.

For one, the all-ways format utilized in the original receives a boost to 20160 win lines from an already impressive 3125 on a fully maxed out grid. That translates to higher chances of landing wins on each round as well as an almost unimaginable potential boost. Secondly, Hathor, the mother of the Pharaohs in ancient Egypt, is introduced in the follow-up to star as a stacked wild. This little addition will see players enjoy one more feature in addition to the multipliers and lives when the session is at its zenith.

Want to learn more about the new game that is already proving popular among slot fans? Read on!

Valley of the Gods 2 Slot For Free — Mobile & PC

If you are the kind of player who looks for the unaltered in a sequel, you are not likely to be disappointed here.

Starting with the idea behind the entire gameplay, players get a carryover of what they saw in the original. That is symbols that form winning combinations to unlock the blockers on screen for more win ways and bigger wins. However, while the older installment could only result in a 5X5 grid with 3125 ways when fully maxed out, the latest one is peculiarly arranged, forming a 3-4-5-6-7-8 grid when fully expanded. This nice touch makes Valley of the Gods 2 look superior right off the bat. And actually, it is!

Moving on to the other alteration, Anubis and Horus vacate their places at the side of the grid. (We presume to leave room for the larger grid). There are linear symbol counters on one side of the grid instead.

Players parachute down to the plains by selecting bets from 0.1-100 units of the currency in use. One thing that lots of people will appreciate is that they can switch from a strictly coin/cash-based algorithm by clicking on the bet/balance displayed onscreen. That is unlike the original algorithm, which was primarily coin-based. Perhaps to remind players of how life in the desert can be, the sequel ships with near-max volatility, which is rated 78 on the Yggdrasil volatility scale. Not sure what that translates to during actual gameplay, but it is certainly higher than that of the original game, which was rated 67. That is not hard to explain, though, because the stakes are way higher here, and the rewards even more so. Finally, the Return to Player percentage is friendly at 96%; just 0.2 units less of what we got last time.

Clear all the Blockers

As you may know from playing the original, the gameplay revolves around using combos to get rid of the blockers. How exactly does that happen? Let us see!

Each winning combination unlocks blockers corresponding to the number of symbols involved in the win. At the same time, re-spins on the house activate, only coming to a halt on a dead respin.

And what happens when you manage to unlock the entire grid? Well, that could be the verge of your breakthrough as this is when the slot comes to life!

Get to the Scarab Collections feature by getting rid of all the blockers. Besides getting to collect for wilds, everything else pretty much remains the same as in the original game.

One life is gifted when the Scarab Collections feature is triggered. An extra one gets added every time you manage to collect five red scarabs on a winning combination. In case you are wondering, the purpose of a Life is to make the reels to re-spin on a dead re-spin.

An X2 booster multiplier is the starting base. The multiplier increases by +1 every time you collect five blue scarabs.

Collect five golden scarabs to be awarded a fully stacked wild during a re-spin.

Note to the reader: The scarabs emerging from each win will depend on the symbols involved in a win. Some of the ones resulting in golden scarabs, for instance, include Bastet, the goddess of warfare depicted as a cat and Set, the god of the desert depicted with the head of a fantastical beast by the same name.

Valley of the Gods 2 — Our Verdict

For a game with so many win ways, we did not expect to find such a strong paytable. It was a good surprise, though, which meant that winning on a large number of the available win ways was not needed to cash out big.

For the strict eye, there are also some noticeable flaws. Like other Yggdrasil releases such as Multifly as well as its original, Valley of the Gods 2 proves to be repetitive. It is a matter of unlocking the playing area for the re-spins, ways boost, Scarab Collections, and bigger wins over and over again. Also, despite the attempt to make the animations quicker this time, we still classify Valley of the Gods 2 as a slow slot. An option to skip them with a single click should be available at this level really!

At the end, however, the pros outweigh the cons, making this another success from the Malta-based slot geniuses. As for our team, we can’t stop thinking about Yggdrasil’s next stop in the journey through the valley!