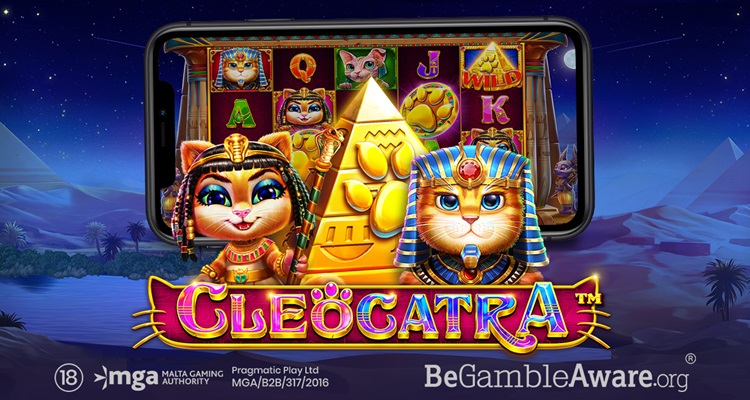 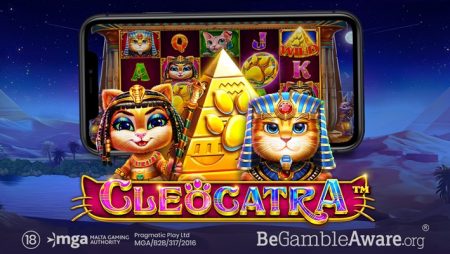 On the heels of its latest Peruvian deal and Pragmatic Play has released its latest title, Cleocatra. The feline-themed online slot game takes place in Ancient Egypt where many animals where revered, especially cats, which were believed to be magical creatures that brought good luck to their humans. That being said, in typical fashion, your favorite game developer puts a light-hearted spin on such serious business as sacred cats and presents the stars of the show in an approachable way.

Here, players are welcomed by the cat Queen Cleocatra on a journey through a cat-filled ancient Egypt where stacked cat symbols and wild multipliers swarm the 5×4 reel set and stand guard on either side of it. The high volatility, 40 payline video slot can award up to 16 free spins, with wild multipliers becoming sticky and remain throughout the bonus round  for a chance at unlocking the game’s 5,000x max win!

Expect a top RTP of 96.20 percent, and wins to form by landing three or more matching symbols on adjacent reels starting from the leftmost side. Playable on any device, bets rage from 20 p/c to £/€100 per spin and the hit frequency is approximately 1 and 3.

Cats run the temple and serve as the game’s four most valuable premium symbols, which are worth 5-20 times the stake for a line of five-of-a kind. Following the kitties, is an Ankh, a crook and flail, worth 2.5-3.75x for the same five-of-a-kind winning line and finally 1-1.5 times the bet is what you’ll get for landing the same for the lower paying 10, J, Q, K and A card values.

A paw-printed pyramid serves a s the game’s Wild and can really get you purring! Landing on reels 2, 3, 4, or 5, they substitute for all symbols except for the Scatter, and they also have x2 or x3 multipliers when they land, which are applied to any win they are part of during base play and the bonus. If additional wilds are part of the same win, the values are added together for even bigger rewards.

During base game play, landing a full stack of cat symbols on the first reel results in the respin feature triggering. At that time, all matching cat symbols or wilds on the screen lock into positions, while all others respin. Respins are awarded until such time as there is a win.

Representing the scatter symbol is a golden paw, which also plays during the base game. Landing at least three of these triggers the free spins feature, which sees players awarded a minimum of eight spins. All wilds stay sticky througout the duration of the bonus round, making for potentially sizeable wins, with a 5,000x max payout. And depending on the jurisdiction, the free spins round can be instantly triggered during base game play by purchasing it for 100x the current total bet. When the free spins feature is bought, 3, 4, or 5 scatters can hit randomly on the triggering spin.

Barzely explains that with a respins feature and a max win potential of 5,000x their stake, “players will have the chance to enjoy another thrilling visit to the sands of Egypt.”

The latest Egyptian themed titles in the provider’s portfolio, Cleocatra joins other player favorites such as Might of Ra and Eye of Cleopatra, released in February and April this year, respectively.

Just ahead of the new game launch, Pragmatic Play further enhanced its existing partnership with Casino VIP 365, taking its top-performing bingo product live with the Peruvian operator and in doing so strengthens its position in Latin America.

Under the new deal, the brand’s players will now have access to the provider’s growing suite of flexible and customizeable bingo titles and variants such as Sweet Bonanza Bingo, which combines traditional video slot play and 90 ball bingo format, Reels Room and Bingo Blast, which was released in April 2020.

Prior to the current deal, the multi-product content provider already supplied the operator with a trio of verticals, including slots, live casino and virtual sports.

The agreement is in keeping with Pragmatic Play’s growth strategy in Latin America, having achieved a strong position in regions such as Venezuela, Colombia and Brazil, as well as other nascent markets via key collaborations with leading operators like Estrelabet, MarjoSports and King Deportes among others.

More about:  The Complete Guide to the First Round of the 2021 NBA Playoffs

“It’s a pleasure to be expanding our partnership with Casino VIP 365 further. The operator’s players have become fans of our high quality, engaging games and we are excited to be adding our leading bingo variants to their offering,” read a statement from Victor Arias, Vice President of Latin American Operations for Pragmatic Play.

Arias added that Peru represents “another important market” within their overall Latin American growth strategy and their “successful and growing partnership” with Casino VIP 365 “exemplifies this perfectly,” as they begin to introduce their growing player base to more of their “dynamic portfolio.”

Also commenting on the new deal, Rocio Pinto at Casino VIP 365, said that by expanding their relationship with Pragmatic Play while at the same time introducing more of their ground-breaking verticals to their players, their position as a leading operator in Peru is secured.

“Our players have come to expect a vast array of high-quality products from us, and the latest integration of the provider’s bingo vertical will add even more immersive gaming opportunities for our customers.”