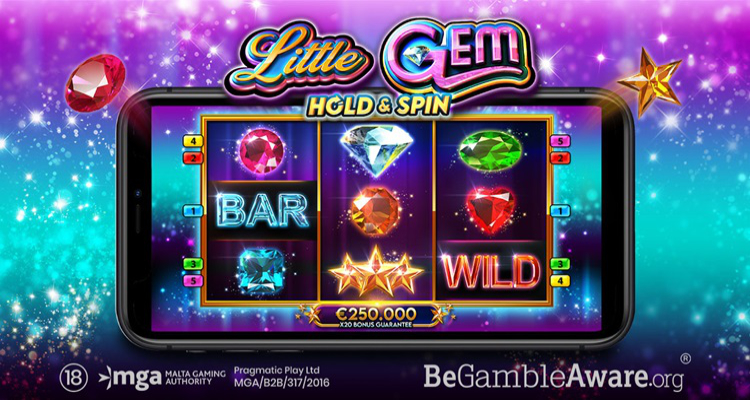 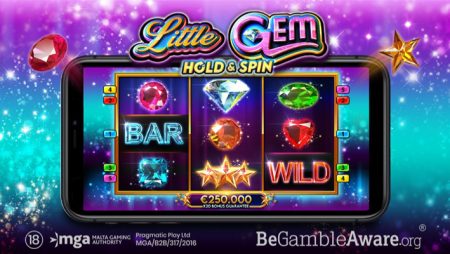 Pragmatic Play has launched the latest Hold & Spin title powered for British game developer Reel Kingdom, with the partner studio‘s new online slot, Little Gem, bedazzled enough to light up the darkest sky. Seriously, players might need to wear “Sunglasses at Night” for this visual journey where a gold-framed 3×3 grid is displayed prominently in a blue and purple aurora polaris type situation.

Playable on any device, only three-of-a-kind winning lines are possible in this medium volatility video slot that has a 96.70 percent RTP and 5 fixed paylines to land combinations across.

The paytable consists of nine normal pay symbols, including highly polished gems and a couple slot icons. In ascending value, you’ll find an X and red, orange and blue gems, tripple gold stars and a pink and green gem, along with a BAR and a diamond, which are worth from 4x the bet to 50x the bet for a three-of-a-kind winning line. Each of these pay from left to right on adjacent reels starting from the far left reel.

Worth the same as the diamond (50x the stake for 3 in a row), which are the most valuable symbol, the WILD symbol substitutes for for all symbols except for the sliver and gold Money Symbols, which we’ll explain un momento. Whenever the WILD symbol helps form a winning combination, it expands vertically, covering all positions on the reel.

It’s probably a no-brainer that the Hold & Respin bonus round is the game’s focal feature, and when triggered it provides respins and the chance at 2,460x the bet.

When the mode begins, the symbols on the central reel lock into place. And as stated, the values of the two Money coins on the middle reel are combined with the total win upon the feature’s ends.

“Little Gem™ provides players with a blend of simple gameplay and rewarding multipliers that effortlessly complement each other.

“The visually striking theme delivers an engaging environment as users try and reach the bonus feature, and we expect to see players return to the dazzling experience time and time again.”

If you like your slots big and bright and simple to play, then Reel Kingdom’s Pragmatic Play-powered Little Gem is the game for you! It follows Spirit of Adventure, Tic Tac Take and Snakes & Ladders Megadice, all from the UK-based studio and all powered by Pragmatic, alongside the latter’s own recently released hits The Great Stick Up, Goblin Heist PowerNudge and Fire Strike 2. Each of the online slot games can be found within Pragmatic Play’s fast-growing portfolio of more than 200 HTML5 titles.

Look for the multi-product content provider to drop its cleaverly titled, Cleocatra, on May 26th. The feline-themed game takes place in Ancient Egypt where many animals where revered, especially cats, which were believed to be magical creatures that brought good luck to their humans.