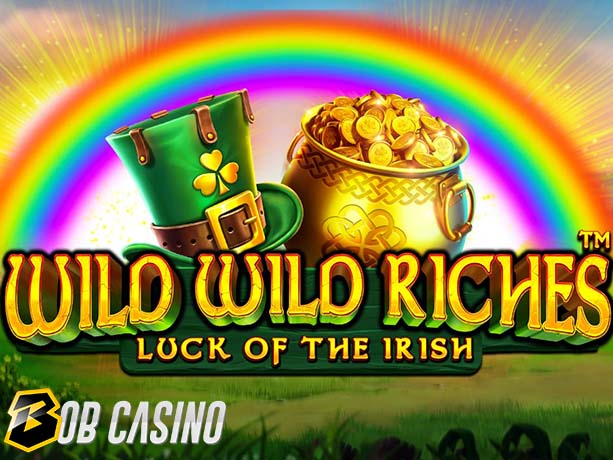 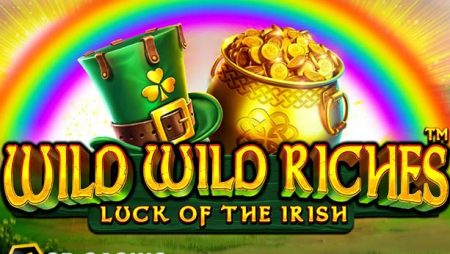 What’s the craic punters! Divil a bit? Good, because it’s time for yet another adventure to the good ol’ land of saints and scholars with Wild Wild Riches from Pragmatic Play. Like in Leprechaun Song and Leprechaun Carol, the developer’s previous outings here, it will be all about chasing the ends of rainbows to find the pots of gold, which according to legend, were buried there by leprechauns.

How about the actual gameplay? Well, with the name “wild” repeated twice in the title, it shouldn’t be too hard to guess what to expect.

Raise a beer to the newest one from Pragmatic Play! Play Wild Wild Riches for real money here or enjoy a free demo below:

Like a typical Irish-themed release, Wild Wild Riches does not disappoint when it comes to the graphical clichés department. A green countryside is well in view, paying homage to William Drennan’s depiction of Ireland in his rhyme When Erin First Rose. The end of a rainbow is visible, and as it appears, a leprechaun has been sloppy hiding his gold here.

Players looking to keep some of that gold for themselves have to select bets ranging from €0.25 to €125 right before setting the reels in motion. That is achievable on any device and browser, and there is even an option to preset automatic spins. How about the technical side of things?

Layout-wise, the game plays on a 3-3-4-4-4 set up with an impressive 576 ways to win. Such a layout guarantees the potential for big wins, which the developers cap at 4600X here. In terms of volatility, Wild Wild Riches is not as volatile as they get from Pragmatic Play because the very last bar on the meter is barely half-way. As for the Return to Player, players get an average rating of 96%, which they could boost to an inspiring 96.77% with the Ante Bet feature (discussed later).

On to the symbols and their values, there should be no surprises. Pragmatic Play has gone for the usual suit fillers as the low-pays and a mushroom, tobacco pipe, horseshoe, Celtic harp, and a pint of gat as the high-pays.

Values are not so bad, with five pints of beer racking up 8X at best. There is also a non-paying wild, which shows up on the first and second reels.

Pots with coin value modifiers can show alongside the regular symbols on the third, fourth, and fifth reels. Cash the displayed coins by lining them adjacently to wild symbols. Players will be thrilled to find out that the coin values can go up to 25 times their current bet.

There are Fixed Jackpots to be Won!

Whenever collecting gold, make sure you watch the fifth reel as you might as well cash the jackpots flaunted at the side of the grid. The values of the Mini, Major, and Mega jackpots are fifty, one hundred, and five hundred times the bet, so not bad!

You can also collect multipliers of up to 5X on the fifth reel. These can make the round’s coin collections better.

The leprechaun’s hat is the scatter. It only shows up on the third reel.

Ten rounds on the house are unlocked every time it lands alongside wild symbols on the first and second reels. (That includes during free spins, without limits). The chances of winning big in free spins are even higher due to higher traffic of wilds as well as coin pots.

More about:  Rio All-Suite Hotel and Casino to re-open by the end of the year

With the way this slot’s gameplay is set up, it makes sense to include a button that allows players to increase the chances of having more wilds populate the play area on each spin. Players who opt for that will have to part with 20% of their current bet on each spin.

With its peculiar layout, coin collections, jackpots, and outburst of bells reminiscent of Vegas-style slots, Wild Wild Riches sure doesn’t feel like playing a typical Irish-themed game. That was what the developers intended, and we are happy to report the success!

As the Lilywhites say it, Audere est Facere (“To Dare Is to Do”). Make sure you have a good go at this one to bask in its generosity!