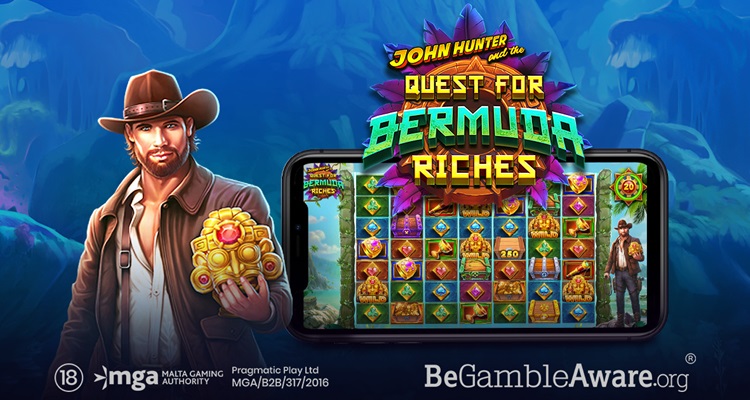 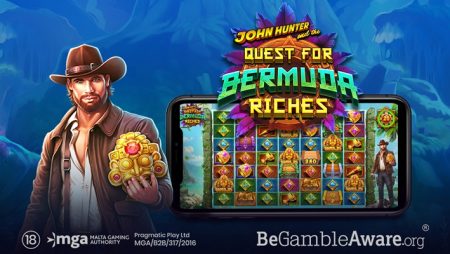 Online casino software provider Pragmatic Play is on a serious tear this month, releasing its 7th new title, John Hunter and the Quest for Bermuda Riches, which sees the iconic Indiana Jones-esqe character in search of hidden treasure on the island territory in the North Atlantic Ocean.

The sixth installment in the wildly popular John Hunter series plays on a 7×7 grid that covers much of the background with its turquoise and blue water and palm trees. Highly volatile, the cluster pays video slot has a 96.33 percent RTP, which increases ever so slightly when buying “free spins,” and a max win of 5,000x the bet.

Here, regular symbols include diamonds, clubs, hearts and spades precious gem card suits, which pay in clusters of five or more matching tiles joined together either horizontally or vertically. Winning clusters are blasted away and new symbols tumble down to take their place, which could lead to extra wins. The process is exhausted when there are no new wins. A gold telescope, an emerald chalice and a jewel-encrusted ring are worth more. The latter is worth the most, with a winning block of 15+ symbols paying 15x the total stake.

Appearing on all reels, the golden head serves as the game’s Wild symbol and substitutes for all symbols with the exception of the John Hunter Scatter, money and collect symbols. The Scatter can also appear on all 7 reels.

Occasionally, regular golden Wild symbols will change into Cursed Wilds and when they do, one of two things happens. They [cursed wilds] either get upgraded with a x2 multiplier, or additional wilds are placed on the grid in random positions.

During base game play, Money symbols assigned with random cash values can land anywhere on the reels. If one or more of the money symbols lands at the same time as a Collect symbol, players are awarded the value of all the Money symbols in view. Pay close attention to the type of Collect symbol that lands, as there are four different ones, each of which has its own individual requirements and rewards. They are:

Furthermore, when at least three Scatter symbols land, wins worth as much as 100x the player’s stake can be triggered, while also unleashing the Extra Spins feature and 12 extra spins. Player’s can also choose to buy the feature in the base game at a cost to them of 100x their total stake.

In a company news release on October 28th, Yossi Barzely, Chief Business Development Officer for Pragmatic Play, said the John Hunter series “has become a staple of our portfolio,” and they are “thrilled to inject new life into it” with the launch of John Hunter and the Quest for Bermuda Riches.

“We’re always looking for new ways to entertain our customers with exciting content, and the John Hunter series presents us with the perfect opportunity to continue an epic narrative with equally thrilling mechanics.”

As mentioned, the online slot is the SEVENTH new title launched by Pragmatic Play in October, with Treasure Wild kicking off the month, followed by Piggy Bank Bills, Mystic Chief, Cash Bonanza, Day of Dead and Star Pirates Code. All of the new releases join the provider’s collection of 200-plus HTML5 titles in its expansive games portfolio, each of which can be played on desktop, tablet and mobile devices.