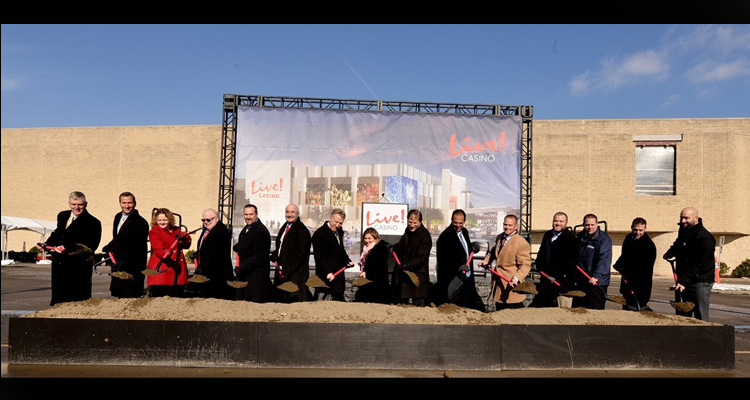 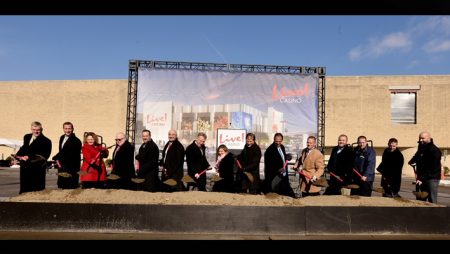 The new $150 million Live! Casino Pittsburgh is one step closer to opening, as a groundbreaking ceremony was held on Wednesday for the 100,000 square foot complex being built in Hempfield Township, approximately 30 miles from downtown Pittsburgh.

The effort by Stadium Casino Westmoreland RE, LLC, part of Baltimore-based The Cordish Companies, will replace the Bon-Ton department store that shut its doors in the slumping Westmoreland Mall in August last year.

Construction is expected to contribute an additional $148 million in economic impact, including some 960 direct and indirect construction jobs, along with approximately 500 permanent jobs for both local and regional residents.

Commenting on the milestone in a recent press release, Jon Cordish, Principal, The Cordish Companies, said…

“We couldn’t be more pleased to break ground on the newest Live! Casino project and expand this distinctive brand even further into Pennsylvania.

“We are a family-owned company that is deeply committed to treating our guests like family, so we’re going to ensure that everything our guests have come to love about Live! Casino – first-class service, friendly atmosphere and exciting environment – is reflected in this new, unique gaming, dining and entertainment destination in Westmoreland County.”

Upon completion, the gaming, dining and entertainment destination will feature 750 slots, nearly 30 live-action table games, the maximum allowed by Pennsylvania law for Category 4 casinos, a sportsbook and just recently announced, Sports & Social Steel City. The 445-seat, two-level sports restaurant, gaming venue and social lounge will bring the “ultimate sports fan experience’ to guests.  In addition to a 45-foot high LED video screen and a Classic American Grill menu, the venue will also feature an array of interactive social games, such as a golf simulator, bowling, darts, ping pong and more.

“Our team is very excited to enter the Pittsburgh market to introduce the way we approach and create unique entertainment experiences for our guests,” said Reed Cordish, Principal, The Cordish Companies. “We’re confident that Live! Casino, along with Sports & Social Steel City and other amenities, will be the perfect addition to the region. We’re very grateful to everyone in the community who is working with us to bring this project to life.”

More about:  Estonia’s Gambling Tax Revenue Plummets by 30% Due to Coronavirus

The Cordish Companies is also developing the much larger Live! Hotel and Casino Philadelphia, and in August was also awarded a Category 2 license renewal for its construction. The company also operates Live! Casino & Hotel in Arundel Mills Maryland and the Xfinity Live entertainment complex in Philadelphia.

In January 2018, Stadium Casino won the second round of bidding to open a mini-casino in Pennsylvania, with the Baltimore firm tendering a winning bid of $40.1 million. As a condition of the sale, the operator was required to open its new gambling venue inside Westmoreland County and within a 15-mile radius of the region’s Derry Township.

Announced in July 2018 and the gaming license approved by the Pennsylvania Gaming Control Board (PGCB) in August, Live! Casino is expected to spur development and encourage people to spend time at Westmoreland Mall, where a myriad of closures have plagued the property owned by real estate investment trust, CBL Properties.

The shopping complex, one of the largest in the western part of the state, could see spillover foot traffic from the coming casino, which would be another plus considering that the vacancy rates at malls nationwide is at 10.2 percent and continue to rise, according to real estate research firm Reis Inc. cited in an April Reuters report.

While it has yet to receive its license, Mount Airy Casino Resort, owned by the family of billionaire founder Louis DeNaples, is planning to build a mini-casino on the opposite side of the state along the Ohio border in Big Beaver Borough, Beaver County, after in February last year submitting a winning bid of nearly $21.2 million.

The law allowing up to 10 new mini/satellite (Category 4) casinos passed in October 2017, however, it wasn’t until January 2018 that the live auction process began. A series of live auctions awarded five licenses but by April 2019, there were no other bidders, prompting the PGCB to run a second round of auctions on September 3, when once again, there were no bidders.