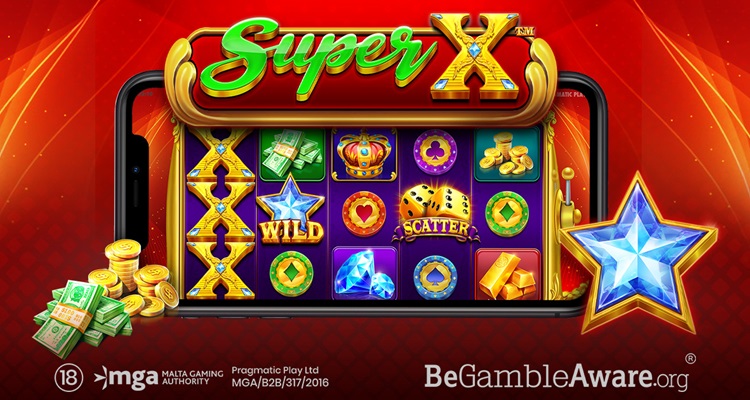 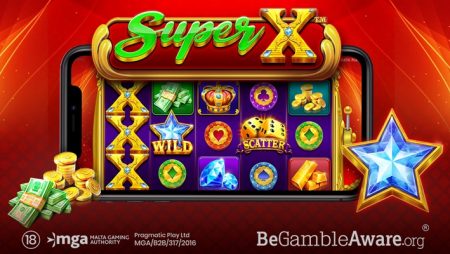 Pragmatic Play has made quick work of launching its fourth new online slot title of the month, Super X, which likewise wastes no time in bringing the action to players in a big way, right away, with wilds, scatters, respins and extra spins.

Unlike its predecessor Super 7s, a classic fruit-themed slot launched in February 2020, Super X mirrors the theme of recent hits such as Empty the Bank, Piggy Bank Bills and Cash Bonanza, using red, purple, green and blue poker chips stamped with hearts, clubs, diamonds and spades card suit icons for the lower pays, while gold coins, stacks of cash, gold bars and diamonds for the higher pays, with a crown serving as the top regular symbol. Landing a five-of-a-kind combination of premiums pays from 2.5 to 20 times the stake.

Feature symbols include the X symbol and a Star Wild, which only appears on reels 2, 3, or 4 in the base game when it substitutes for all symbols with the exception of the Dice Scatter. Landing at least three of the latter symbols retriggers a Respin bonus when up to three X symbols land on the first reel.

Players have a chance to maximize returns in the new game through the X bet Respins feature, Extra Spins and the Super Spin Ante Bet, which is also available in the base game. If a player decides to opt-in on the new Anti Spin feature, they will need to pay 10x the current total for each spin, which turns every spin into a “Free Spins” round.

More about:  NetEnt AB hoping to hit the back of the net with new Super Striker video slot

“Super X™ is a slot title that oozes class, with its luxurious symbols and even more glamorous rewards thanks to the collection of exciting features that have been added.

“The combination of cool new features alone makes this slot title stand out from the crowd, providing players with an experience that changes with every spin.”

The new online slot also follows the latest addition to Pragmatic Play’s Live Casino suite, with ONE Blackjack 2 – Indigo released on November 17th. As the second installment to the ONE Blackjack series, the new live dealer game maintains all the basics of the original game while enhancing delivery and adding a dynamic with major winning potential. The new blackjack game is broadcasted from the developer’s state-of-the-art Bucharest studio and promises a truly immersive live casino experience.

Before the month is over, fans can expect TWO more new slots from their favorite game developer, with Book of Fallen and Santa’s Wonderland dropping on November 25 and the 29th, respectively!