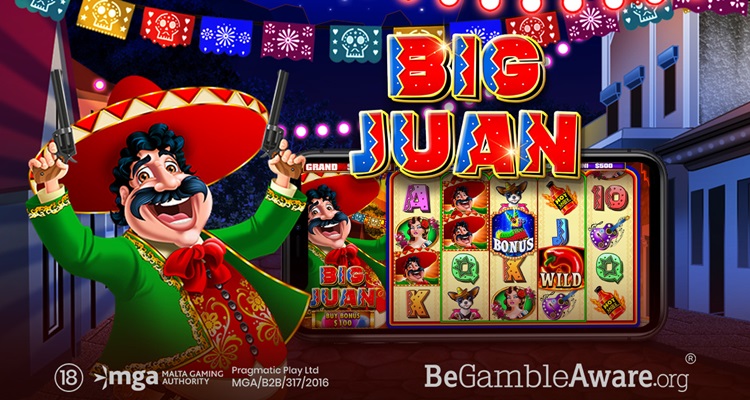 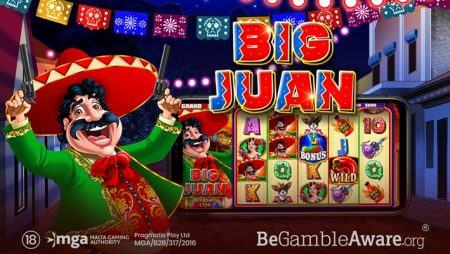 Players could be in for some big wins when they join the fiesta in Pragmatic Play partner Wild Streak Gaming‘s latest online slot, Big Juan, where a lively soundtrack, eye-catching animations and winning potential of 2,600x the bet “provide a real feast for the senses!”,

It is the second Mexican-inspired game released by Pragmatic within a month, following its Day of the Dead hit launched on October 21st, and provides players with plenty of excitement thanks to wilds, extra spins, bonus rounds and more.

This highly volatile, 5-reel, 4-row video slot finds our leading character Big Juan on the left side of the screen. From there he overlooks the reels that are filled with colorful symbols, including five low pay 10-A card suits and the higher paying guitar, piñata, sombrero-wearing chihuahua, bottle of hot sauce, pretty señorita and, of course, Big Juan.

Players can form winning combinations by landing three or more of the same symbol from the left of the game grid while earning 2.5 to 7.25 the stake for five-of-a-kind premium combinations. Landing anywhere, the chili symbol serves as the game’s Wild and is worth twice as much as the top high pay symbol and can substitute for all other pay symbols.

One of two features in the game, the unique Wild Switch does its thing during base game play whenever at least six matching symbols land on reels 2, 3, or 4. When that happens, all symbols involved are transformed into chili wild symbols, boosting wins.

The other feature you’ll want to keep an eye out for is the Respins Bonus, which is activated by landing 3, 4, or 5 piñata scatter symbols. The feature is played on a 3×3 sized grid, where players are provided with 10 to 15 respins along with a Bag of Coins symbol that sits in the middle of the reels. Players can win coin symbols, extra win symbols, or one of four – Mini, Minor, Major, and Grand – fixed jackpots, awarding up to 2500x the total stake.

“We are back with another Mexican-themed adventure, following on from the popular, Day of Dead™.

“The joyful soundtrack and eye-catching animations on display in Big Juan™ provide a real feast for the senses, topped only by the huge win potential on offer in the Free Spins bonus round.”

Most recently, the developer launched the sixth installment in the wildly popular John Hunter series. John Hunter and the Quest for Bermuda Riches is a highly volatile, cluster pays video slot with a 96.33 percent RTP and a max win of 5,000x the bet. Each of the games complements Pragmatic Play’s fast-growing games portfolio suite of more than 200 HTML5 titles.

The multi-product content provider also recently debuted its live casino products in Latvia courtesy of a business agreement with Riga-headquartered iGaming operator, Enlabs, while at the same time expanding its footprint in Brazil via a multi-vertical deal with exciting start-up Bingotine.

October brings in $1.7m in online gambling and sports betting revenues for Connecticut
16 hours ago

Churchill Downs Incorporated said to be exploring potential TwinSpires sale
16 hours ago
Recent Comments
Categories
Recent Posts
18+
Gambling News from NewsCasinoNew.com is made for the most passionate fans of online casinos and internet gambling. We cover everything: from popular gambling world events and trends to new casino slot game releases and reviews, you will find the latest news stories.