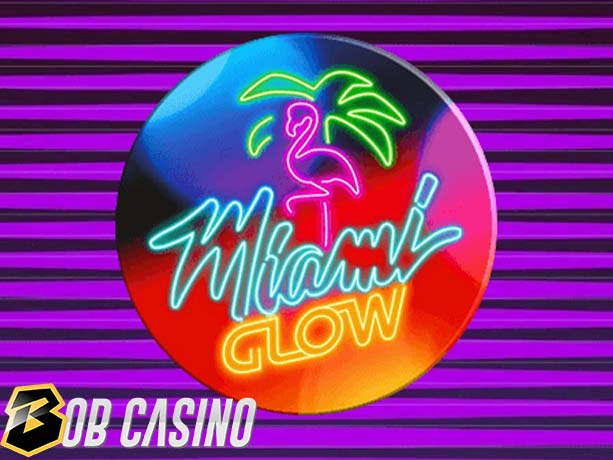 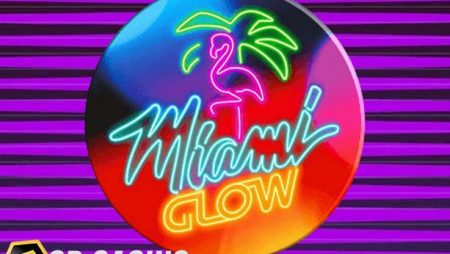 Board our time machine punters, it’s time to head back to the 80s with Miami Glow, Snowborn’s latest addition to Microgaming’s rapidly growing portfolio of slots from its roster of content partners. Now, we have got to admit, the setting in a city that is perceived as representative of that era’s culture is perfect. But if you are thinking the Miami Drug War or more relatable music, movie, and videogame depictions such as Miami Nights, Miami Vice, or Vice City, to name but a few, you need to dial it down to just neon and synthwave.

Sounds enough for a fascinating slots theme, but there’s no need to dwell so much on that. Let’s probe into the nitty-gritties, namely the math model, features, and potential.

A blend of outrun music and neon lights sure to ignite the retrowave vibe! Play Miami Glow for real money here or enjoy a free demo below:

Starting with the foremost math model stat in any slot, volatility is rated high at 4/5, making Miami Glow the kind of slot that dishes out big wins in between bankroll-shrinking sessions. Above-average RTP and hit rate ratings, however, help balance things out, meaning that risk-avert/casual players can also try their luck, but with small bets.

Speaking of bets, players get an €0.2-20 bet range, which is brought up by hitting the casino chip-shaped button. Select the ideal stake, and then commence playing with the central spin button or the auto-play button above it.

Every spin will land 5 symbols on each reel. Putting a winning combination together requires you to line up 3-5 of a kind on any one of the utilized 10 paylines.

As for the symbols you will find here, they all shout “Miami vibes all night long” with their neon glitz. They include a three-dimensional diamond, a cocktail glass, a sighting of the famed Floridian flamingo iconography, pair of lips, and a separate bunch of blackjack icons acting as the paytable fillers. The first-mentioned symbol is the top-payer here with rewards of up to 25X.

Keep an Eye Out for the Wilds!

Miami offers regular and sticky wilds, which pay as much as the premier symbol in the paytable on top of their substituting powers. The only thing to set them apart is that all sticky wilds trigger a round on the house upon landing while they remain sticky to almost guarantee a win.

Multiplier Boosts on any Spin!

Miami Glow comes with a random win booster multiplier selector, which could award 2X, 3X, 5X, or 10X on any spin.

At the helm of Miami Glow’s feature is the Glow Bonus Feature, which is activated by 3 glow symbols on the grid. Just one round on the house is awarded here, but the outcome guarantees stacks of wilds, thereby increasing your chances of winning big.

The best-case scenario would be to land 5 full stacks of wilds, which will award an aggregated multiplier of 250X (25X on 10 paylines). Assume the highest possible multiplier of 10X is awarded on the same, and you will be walking away with a decent 2500X!

It was quite disconcerting to see the team behind this release claiming that it was capable of dishing out 12500 times the Bet. We mean, you shouldn’t even bother going back to a review site that picked that up because it’s one big lie. The best this slot can do is 2500X, and there’s even no need to exaggerate as that is quite decent compared to what other slots out there have to offer in terms of max potential.

Anyway, Snowborn Studios might not be too good at describing what they create, but they have shown that they are capable of quality with the 2 slots they have released so far. Miami Glow might be low on potential compared to the first release, The Vault, but it is more lenient, all thanks to its higher RTP and hit rate. Furthermore, most will prefer Miami Glow’s single round on the house where a big win is guaranteed over taking chances with The Vault’s ten.