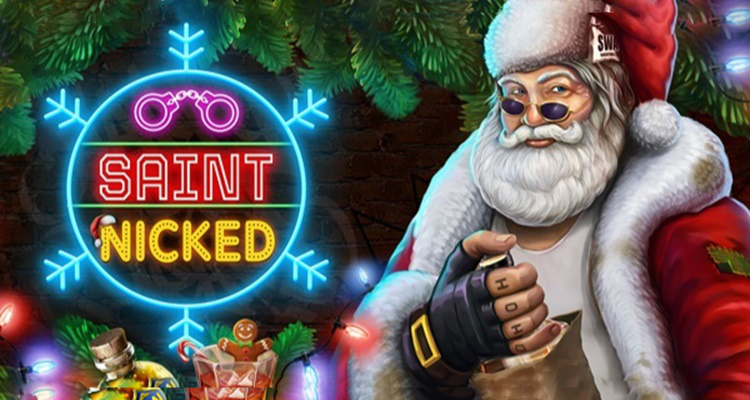 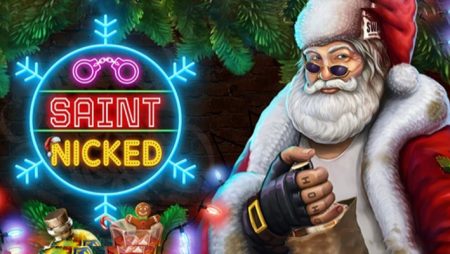 If you like a little naughty with your nice you’re going to love the latest online slot from Malta-based software development studio, Lucksome.  The new addition to its growing games portfolio, Saint Nicked, is lauded as one of its “most exciting releases of 2022,” according to Johan John, senior product manager for the company that is part of the Blueprint Gaming network.

Destined to become a classic, the 5-reel, 3-5 row, medium-high volatility slot is anything but your traditional Christmas-themed slot. You see, in this version, Santa and his lead reindeer Rudolph have grown bored with the same festive duties they have famously carried out all these years and have found themselves drawn to the local pub, where after one too many mugs of sudsy ale, it’s looking like things could get out of hand.

We find the tipsy duo on a mission to deliver holiday cheer all while trying to avoid the law and spend x-mas eve behind bars.

Rather than the North Pole or a cozy living room with a decked-out Christmas tree and stockings hung by the chimney with care, the setting here is the alley behind said watering hole. There you’ll find a brick wall serving as the game grid which in the base game starts out at 5×3 in size and 243 ways to win and can expand to 5×5 and up to 3125 win ways during free spins.

Making up for the unconventional visuals, the soundtrack provides just the right amount of holiday cheer, while betting options range from 20 p/c to £/€40 per spin ($0.20 to $200) and can be adjusted via the bet menu button. Meanwhile, the maximum return to player (RTP) is 96.28 percent and the max win is 5,000 x bet.

The video slot is jam-packed with features, such as Free Games, an Advent Calendar, Happy Hour, a Bar Meter, Santastic Multipliers and more, appealing to a broad range of slots players, such as those at SlotsLV.

Regarding Santastic Multipliers, when Santa Claus and his BFF Rudolph are part of a winning way, every win on that spin sees a random multiplier applied to it. This particular feature can be triggered in the base game and Free Games rounds, with multipliers up to x5 in the former and up to x25 in the latter.

Located to left of the reels, the Bar Meter fills when special sudsy beer mug Sub Symbols land during base game play. This triggers the Advent Calendar feature and the values on the sub symbols determine how much the Bar Meter increases. This process continues until a spin fails to land a sub symbol.

As players open the doors on the Advent Calendar, the game saves their progress across sessions, with the available prizes getting bigger and better as they advance. Making it to the 25th door, unlocks an additional -permanent- Free Games trigger. The Happy Hour feature, meanwhile, can randomly trigger on any spin during the base game, and when it does adds a number of sub symbols to the reels.

Landing 3, 4, or 5 scatter symbols in the base game trigger 5, 10, or 20 free spins, respectively. Reels in the Free Game start at 5×3 and landing the Key symbol sees two additional rows unlocked. Additionally, this action awards another free spin, and landing the Soap on a Rope symbols does the same. Unlocking all of the locked spaces sees the board expand to its full 5×5 potential with 3,125 paylines.

Also commenting on the guaranteed hit, Lucksome Founder and Director Bryan Upton adds to the recent presser: “We’ve included configurable options for our multi-jurisdictional customers, including a Bonus Buy features and a max win of 5,000 x bet. Christmas really has come early, especially for fans of cheeky humour, prize trail mechanics and multipliers.”