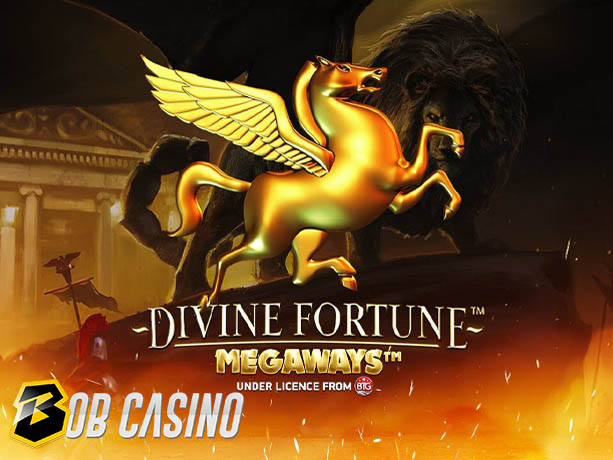 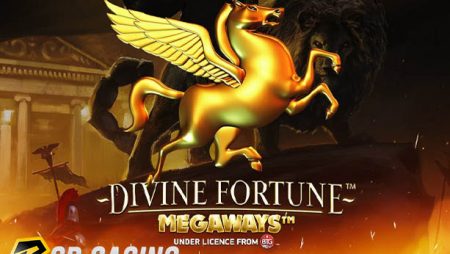 Looking to continue putting the BTG-patented Megaways™ engine to use, NetEnt has used it to enhance yet another of their classics, Divine Fortune. Same as in the original, players will head back to a mythical era to enjoy free spins, falling wild re-spins, and the wild-on-wild feature. The remake does not come without feature-alterations, though.  Let us find out what they are.

The BTG-patented Megaways™ engine packs a whopping 117649 ways for this NetEnt classic. Just the perfect way to bump up its thrills! Play Divine Fortune Megaways for real money here or enjoy a free demo below:

Launching the remake, you realize that a lot has changed design-wise, starting with the backdrop that now displays Pegasus high up on the skies instead of a temple entrance. The 5X3 setup is also a goner, replaced by the intriguing Megaways™ format that sees a varying number of symbols on each reel produce up 117649 winning ways.

Divine Fortune Megaways is playable on any device. Well, except the dumbed-down light Phone 2 or any other that doesn’t support internet browsing. Bets ranging from 0.10 to 100 units of the primary currency are available, meaning that just about anyone gets consideration, budget-wise. As for the algorithm, some stats remain the same as others get treated to an adjustment. Treated to the latter are the Return to Player percentage, down with just 0.5% at 96.09% and an unrevealed base game potential. Remaining the same are volatility and hit rate, rated medium-high and above-average, respectively.

Like in most Megaways™ remakes, the symbols we saw in the original make a return here. That means blackjack fillers and four high-pays, including an eagle, cow, lion, and the Gorgo. As you would expect, values are unimpressive, since the goal should be to win on a big number of the availed ways for a breathtaking payout. Also making a return is Pegasus to help cobble wins together as the substituting wild.

First of the carryover-features is the Falling Wild Re-spins feature, where a wild triggers just enough re-spins for it to move out of the grid in one-position, up-to-down movements. See why they are named falling wild re-spins?

Like the original, Divine Fortune also ships with the named feature activated when a wild symbol lands on a position that’s already occupied by a falling wild. Here, the Pegasus comes to life, occupying the entire reel to increase the chances of forming a win. After the wins have been evaluated, the wilds then shift down to one position as just enough falling wild re-spins are activated for them to shift out of that reel.

The scatter symbol remains the same as the hand of Zeus. The number of free spins it awards, however, changes to ten, fifteen, and twenty for four, five, and six appearances, respectively. Lucky you, if you manage to get more scatters, as each awards five additional free spins. Same as before, each wild appearing in the bonus round will expand to cover the entire reel.

And that’s not all. Five gold, silver, and bronze coins with Pegasus’ emblem can line up to award an instant 10, 25, and 500X instant reward. Needless to mention, these replace the live jackpot prizes of the original.

Divine Fortune Megaways has nodded to the original with the carryovers while keeping things fresh with better free spins offers and a format change that’s hard to miss. The only point of contention is scrapping off the progressive cashpot, but most will feel content, keeping in mind that the Megaways Engine comes with a potential boost.