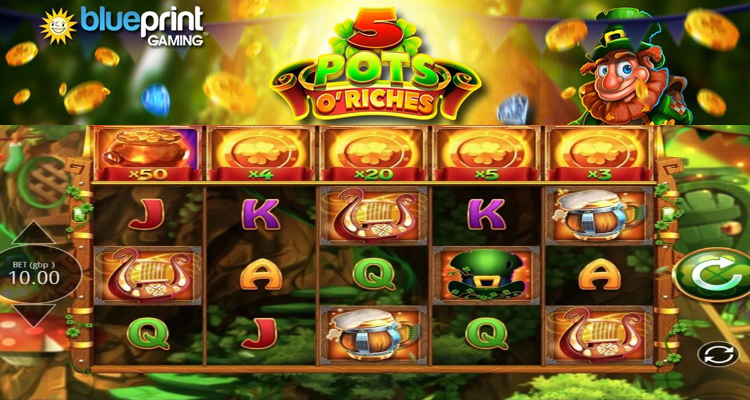 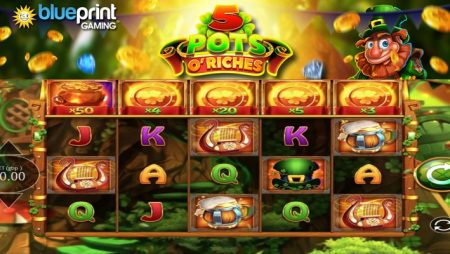 A departure from its last several releases, Blueprint Gaming has revisited a popular theme in the world of online slots, with its newest Irish-themed title, 5 Pots O’Riches. Played on a 5×3 reel set, the game offers a modern take on a classic genre, adding an extra row at the top of a transparent grid that displays special leprechaun prize symbols.

The medium volatility game is playable on any device and has a 95.5 percent RTP. Regular wins are scored when a player lands matching symbols, starting from the leftmost reel to the right, on any of the game’s 20 fixed paylines. Vibrant graphics combined with a cheerful Irish folk soundtrack, enhance the gameplay experience even more and transport players to the magical Emerald Isle.

Symbols include 10, J, Q, K and A card values, which pay 5x the bet for five-of-a-kind, while the higher paying four-leaf clovers, mugs of beer, harps, and green leprechaun hats pay between 10 and 50x the bet for the same. Flag of Ireland Wilds substitute for any paying symbol and pay the same as the leprechaun hat.

Prizes can be earned from the extra top reel, which spins horizontally while the regular reels spin vertically. When the top reel stops spinning, five special symbols are displayed, aligning with the five main reels below.

In the base game, when a leprechaun symbol lands on the main grid, he awards the prize shown above the corresponding reel. Included in these are the cash value displayed on the symbol, Emerald Wilds, access to free spins, and Collect All, which awards every prize on the reel!

Free spins are awarded by landing a leprechaun symbol and a bonus symbol simultaneously on the same reel. Prior to the start of the bonus round, players will spin a wheel to win from 10 to 30 free spins and a win multiplier of x2 – x5.

Players can also choose to activate the Leprechaun Bet themselves to increase the chances of the grinning leprechaun showing up on the reels. The cost is 0.25x the bet. The feature remains active during free spins.

Commenting on the new game, Jo Purvis, Director of Key Accounts and Marketing UK for Blueprint Gaming, said the following in a recent press release…

“There are even more pots of gold to be found on the other side of the rainbow in 5 Pots O’Riches, thanks to the prize reel mechanic.

More about:  France Bans Poker Bonuses for the Duration of COVID-19

“The additional reel adds another layer of excitement to the gameplay, building anticipation as to whether the lucky leprechaun will make that all-important appearance. Once again, the Blueprint team have done an exceptional job in reimaging a classic theme and incorporating new mechanics to take slot provision forward.”

The Gauselmann Group subsidiary‘s latest launch demonstrates the UK-based studio’s ability to switch it up a bit by adding new experiences to classic themes. And by doing so provide operators with content that attracts a diverse audience of players while also boosting engagement.