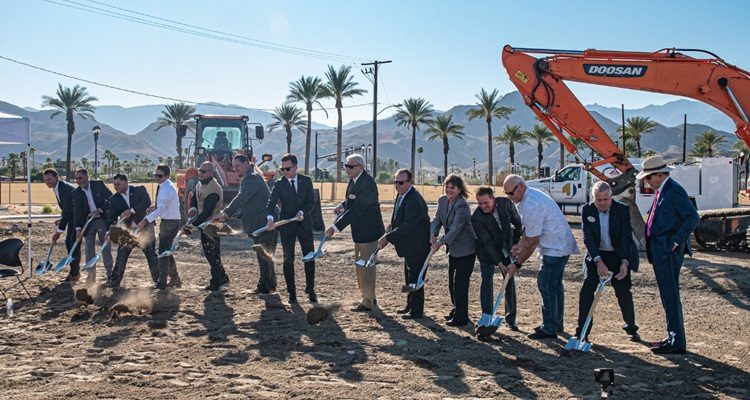 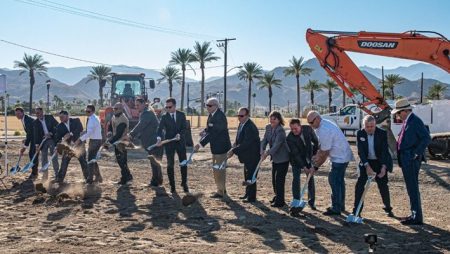 On Monday, November 4, 2019, the Agua Caliente Band of Cahuilla Indians broke ground on its third gaming facility which will be located in southern California’s Cathedral City. The official groundbreaking was led in traditional song by members of the Tribe’s Pai Nik Tem bird singer group.

Under the gaming compact signed in October 2016 by Governor Jerry Brown, the tribe can operate as many as four additional facilities, limited to 500 machines each.

…”We are excited to begin construction on this large-scale investment in Cathedral City.

“This project will create jobs, revitalize an undeveloped downtown property and support Cathedral City’s economic development efforts. In addition, we have the honor of working with Cathedral City to relocate and build a new fire station that will allow fire fighters to serve city residents from a brand new state-of-the-art facility and a more desirable location.”

The Tribe’s request to transfer a 13.6-acre parcel of land into a tribal trust for gaming purposes was recently approved by the federal government. That approval follows the August 28 nod by members of the Cathedral City City Council to approve agreements that will see the tribe pay an average of $650,000 annually for a period of 10 years to mitigate the possible impacts of the planned casino project.

According to the press release, in 2017, the Tribe acquired a 12.5-acre parcel of land at the corner of E. Palm Canyon Drive and Date Palm Drive to complete the 13-plus-acre project site. And as part of the agreement, it contributed $5.5 million for the construction of a new fire station for the city. The land that was added into trust is situated adjacent to reservation land.

Cathedral City Mayor Mark Carnevale, said in an earlier press release that the gaming and entertainment development is a “real game-changer” for Downtown Cathedral City.

“For more than a decade, the land where the casino will be built has been an eyesore to the community. Having a brand new gaming and entertainment center as a major anchor to our Downtown Arts and Entertainment District will spur more interest and development, provide quality entertainment for our residents and visitors, and generate additional revenue for city services. We have been waiting for this day to happen and we could not be more pleased. Downtown Cathedral City is now the place for quality theatrical performances, blockbuster films, concerts, outdoor festivals, and soon to be added to our collection, gaming.”

Grubbe, who described the development as a neighborhood casino for locals, led the recent groundbreaking event alongside mayor Carnevale and other elected officials such as County Supervisor V. Manuel Perez, Assemblyman Chad Mayes, R-Yucca Valley. and Assemblyman Eduardo Garcia, D-Coachella.

Grubbe reportedly said that …”Being a tribal leader, not every tribe has the relationship that we have with our local cities,” and described other relationships as “adversarial.” He added, however, that…

“Today is the result of that government-to-government relationship — working with Cathedral City for the benefit of the community, not just for the tribe, not just the city, but all of us together.”

Plans for the new southern California venue reportedly include a 125,000 square-foot facility, with 65,000 square feet allocated to the casino, 500 Class III gaming machines, such as slot machines, roulette and eight table games, along with restaurants, bars, various retail and mixed-used space and tribal government offices. The casino would be open 24/7 365 days a year.

The initial site plans for the Cathedral City casino were released by the Tribe in January 2108, after originally announcing the gaming and entertainment development in April 2017.

While land acquired after the passage of the 1988 Indian Gaming Regulatory Act generally can’t be used for a casino, it isn’t applicable when the land in question is “located within or contiguous to the boundaries of the reservation.”

According to the Bureau of Indian Affairs (BIA), in the present case, the Cathedral City site is contiguous to the Agua Caliente Reservation.

The tribe reportedly said that between the casino and mixed-use facilities on-site, 556 jobs will be created by the development, which according to Grubbe, won’t cause the tribe’s other two casinos to be affected.

In related news, the Tribe’s new Agua Caliente Cultural Museum to be located in downtown Palm Springs is under construction and slated to open in 2020.

Additionally, the Tribe plans to build a 10,000-seat arena for ice hockey and live entertainment to be located just north of the tribe’s coming downtown casino on 16 acres of tribal land. The partnership with global sports venue development company, Oak View Group, is expected to start early next year and be completed by fall 2021.