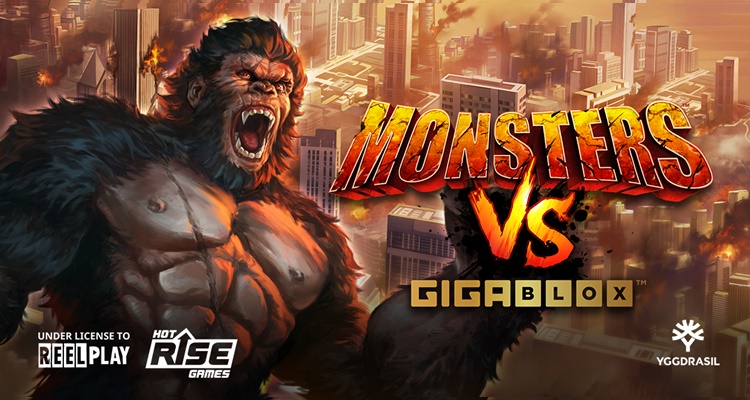 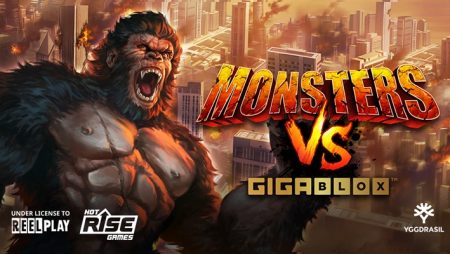 Surrounded by a city in flames, the high volatility video slot which is played across a 6-reel, 6-row grid with 50 fixed paylines has a 95.5 percent RTP and a €249,280 max win. The hit frequency is 38.4 percent and the stakes range from €0.50 to €80 per spin. Wins occur when three or more matching symbols land from left to right on adjacent reels starting from the far left side of the grid.

Players will be working with 9-A card rank symbols as the low pays and six higher paying character symbols ranging from “futuristic sci-fi robots to ancient Eldritch abominations,” led by a monster resembling King Kong, Kongo King. The game’s wild symbol is represented by a gold crown which substitutes for all paying symbols to help complete winning lines. The VS symbol is the scatter while also acting as a paying symbol.

The slot incorporates Yggdrasil’s popular Gigablox game engagement mechanic (GEM), which sees oversized symbols appear at random on any merged reels to form blocks from 2×2 to 6×6 in size. Winning formations of these larger symbols are deconstructed to their regular 1×1 sized symbol parts to determine the payout. During base gameplay, Gigablox symbols can consist of any pay symbol, scatters or wilds, whereas in free spins, only character/monster symbols are used to configure Gigablox symbols.

Landing five or more VS scatter symbols on the reels will trigger the free spins bonus round. When this happens, players are awarded 4 free spins +1 spin per triggering scatter symbol, resulting in 9-40 free spins. Extra free spins cannot be retriggered during the bonus game. Whichever monster symbol that appeared the most during the activation of free spins, becomes the Rampaging Monster during the feature, which is wild and presented in golden form.

Depending on the jurisdiction, players who don’t want to wait for the free spins round to trigger organically are able to instantly activate the bonus round from the base game by clicking on the shopping cart with the star button on the left of the screen. The cost to buy the feature is 75x the stake.

Recent News
FUGASO makes Livespins debut
46 mins ago
Nolimit City is revving up with their latest release, ‘Road Rage’
46 mins ago
Spinomenal secures B2B UKGC licence
46 mins ago
Announcing the shortlists for CEEG Awards 2022 (Central and Eastern European Gaming Awards)
46 mins ago
Recent Comments
Categories
Recent Posts
18+
Gambling News from NewsCasinoNew.com is made for the most passionate fans of online casinos and internet gambling. We cover everything: from popular gambling world events and trends to new casino slot game releases and reviews, you will find the latest news stories.