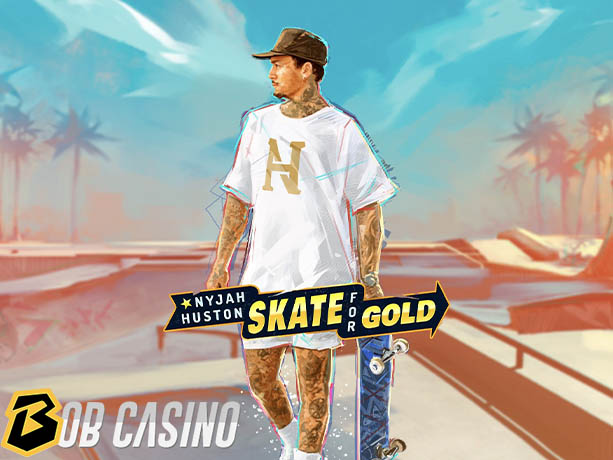 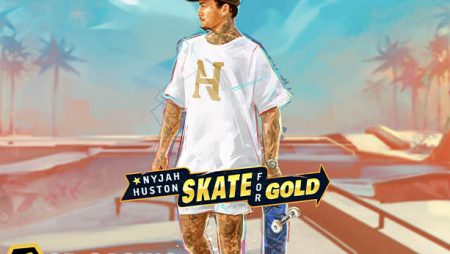 Play’n Go’s yearn for collaborating with superstars to make branded slots had them looking out of the music scene for a moment and into the skateboarding universe, where they settled on Nyjah Huston. If you have not heard of him, Nyjah is a young pro skater hailing from Davis, CA, who is well on the way to eclipsing the legacies of yesteryear’s skating greats such as Bob Burnquist, Tony Hawk, and the formidable Rodney Mullen with his flourishing career. Two-time ESPY Award Winner with 82 champion titles, of which seven are X-Games gold medals at only 25 years of age? That’s no joke!

Back to the slot named after him, it will be all about spinning for the gold symbols as implied by the title. There’s one, a gold set of letters that spells SKATE in the correct order to unlock a bonus round, and two, a stacked golden wild that awards a win booster multiplier of up to 10X on top of its regular-payer substituting powers. Sounds intriguing? Let’s get into the details.

Step into the shoes of the highest-paid skateboarder in the world! Play the Nyjah Huston Slot for real money here or enjoy a free demo below:

As Nyjah Huston will tell you, being successful is all about the prep. We mean, haven’t you seen the Send Saturdays episode on his channel where he trims an overgrown hedge so that he can skate the handrails? Same for the players here, there will be some preparations to go through before diving in on the action.

Usual business, the first thing you have to do is use the + and – button to toggle between various bet amounts. With your bankroll in mind, select just the ideal bet, after which you should set the reels in motion with the play button or the auto-spins button next to it. For those looking to play faster, you can switch to faster gameplay using the tiny lightning bolt-shaped button on the bottom left side of the controls tab.

Visually, the game has struck a scene Huston would be proud of. The playing area looks like a wall filled with street graffiti overlooking a skate park that makes for the backdrop. There’s no telling what inspired the upbeat rock music in the background, but it could be perfect blasting out from the headphones of anyone who is about to perform some stunts on a skateboard.

When it comes to the math model stats, the Nyjah Huston Slot might end up being controversial, just like the lifestyle of the icon who inspired it. Starting with volatility, it is set at medium, meaning that there is no predicting how a spinning session turns out. You could either be off to a slow start with dead spins only to be recompensed after a considerable while or start with bankroll-replenishing low-medium wins. Potential is decent but not stellar at 2500 times your bet. Lastly, the Return to Player percentage is slightly above-average at 96.20%, which isn’t something to be overly excited about.

When it comes to the paytable, there is a set of 5 high-pays and low-pays as well. While the low-pays are the letters S, K, A, T, and E, the high-pays are images of Nyjah Huston, split into stunt symbols and one close-up headshot when he is rocking a snapback. The latter is the highest-paying symbol, racking up 25X for 5 of-a-kind.

As usual, triggering a win involves lining up at least 3-of-a-kind on any one of the available 10 paylines.

Skate the reels with the Wild-board Re-spin Feature

On any spin, the combo meter can appear at the top of the grid to prescribe the stunt symbol you should land anywhere on the playing area to activate the named feature. Here, the reels re-spin while 2 wilds and one stacked wild reel that takes the form of a skateboard are awarded. This almost guarantees a win, and things could even get better when the skateboard turns gold to award a win booster multiplier ranging from 2-10X.

Just like the skateboard can turn gold, the low pay letters, S, K, A, T, & E can also turn golden. When lined up in the correct order to spell SKATE, starting from the leftmost reel, the golden symbols award 12 free spins.

On each round, you are given a chance to land 3 stunt symbols on prescribed reels. And if you manage to do that, the Wild-board Re-spin is activated while 2 additional rounds on the house are added to the free spins tally.

With its sticky wilds, re-spins, and bonus rounds, the Nyjah Huston slot can’t brag to possess something we haven’t seen before. However, the way everything is executed is fascinating, which makes the slot look innovative as a whole. Another positive thing about the slot is its decent potential, which could see the luckiest player walk away with up to 2500X on a single spin. To put things into perspective, this would only be arrived at during the Wild-board Re-spin, with the 10X golden skateboard awarded and only Nyjah Huston’s headshot symbols on the spots not occupied by the awarded wilds.