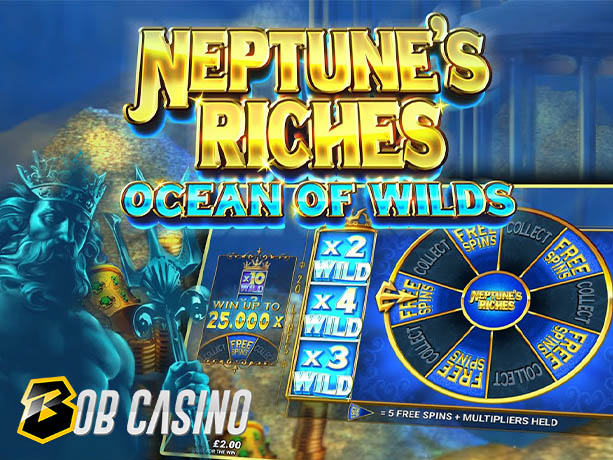 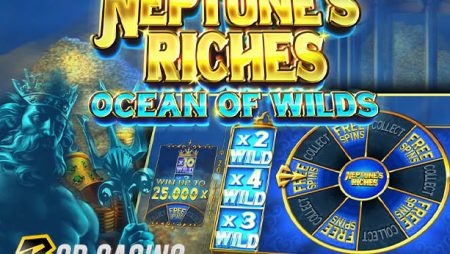 If you were to ask for a Roman version of the Greek god Poseidon, then you would get Neptune. The semblance between the two is undeniable, each using a trident to go all Aquaman with water bodies.

Back to our domain where both deities are stars, Neptune is the latest to be featured in Neptune’s Riches: Ocean of Wilds from Microgaming partners, Just for the Win. As hinted by the title, it’s a slot populated by substituting wilds that put well worth wins of up to 25000X within reach. Without further ado, let’s get into the details.

The god of freshwater and the sea is back, this time with an ocean of wilds! Play Neptune’s Riches: Ocean of Wilds for real money here or enjoy a free demo below:

Just for the Win has gone to town with the graphics here. Not that you need a high-end custom PC to run the game. It just means everything looks really nice as is always the case with this developer, with the 5X3 grid appearing to be submerged undersea.

Joining the water and seaweed in encircling the grid are bits of information, starting with the twenty lines and 25000X potential advertised on the left and right, respectively. An odd pairing there, which means that there must be plenty of modifiers or a strong paytable to make such a win possible. Moving on to the other sweeteners lining the grid, players can also see the slot controls, their available balance, current bet, and three keyholes, which we will come to later.

Players can join the god of the sea on any device with bets ranging from 0.2 to 10 Euros. It could even be an iPhone 11 pro Solarius Zenith by Caviar, provided that it has a browser installed on it and a good internet connection, of course. Other than selecting a bet with the casino shaped bet selector, players can also customize their wagering experience further with any of the other available settings, the most notable being going for auto-spins.

As for the math model stats, players get a well-above-average RTP of 96.15%. Volatility, meanwhile, is rated high on the scale, while the hit rate is friendly at 25% or a win in every four to five spins.

The symbols you find on the paytable spell treasure in bold and uppercase. Well, except for the blackjack fillers, which are hard to miss on virtually every slot. There is a ring, a gladiator wristband, a seahorse made out of precious metals, a crown, and the man of the hour himself as the premium that pays up to 15X on a line.

The answer to the pose question is actually a big yes. And the good news is that you don’t have to wait for long since the first feature is the key to unlocking that endearing potential.

Regular wild symbols shaped as keys can land alongside the regulars on the second, third, and fourth reel during the base game. This activates the said feature, where just enough re-spins are activated for all the wilds in view to move out of the grid in one-position movements towards the top. Also important to point out, all the triggering wilds will turn to special wilds that can pay as much as the paytable’s premium.

During rising wild re-spins, each reel will have an X1 reel multiplier, which one, modifies every wild on that reel, and two, increases by +1 to a maximum of X10 whenever a wild exits the grid through it.

Scatters are represented by the trident. Land 3 to activate a 5 free spins session that starts with a stacked walking wild on reel 5. On every free spin, the stacked waking wild, which constitutes of three special wilds, will move one position to the left.

There are a few things to note here. One, when a new multiplier wild sits next to one of the wilds on the stack, then it will increase its multiplier-modifier by its value. Same as in the re-spins, the max multiplier on each wild cannot exceed X10.

After the final free spin, the free spins retrigger wheel gets activated. If you are lucky, the wheel will land on “free spins” to retrigger the bonus.

The developers at Just for the Win have really stepped up their game with Neptune’s Riches: Ocean of Wilds. It’s their F131 by all means, primarily because of its potential, which makes grinding through the high volatility gameplay worth it!

SimPocalypse- The continuation of civilization is in your hands. EA Managerial-Strategy game now challenges players of Steam to master it
9 hours ago

RWG Casino Complex Temporarily Closed Until February 4
9 hours ago
Recent Comments
Categories
Recent Posts
18+
Gambling News from NewsCasinoNew.com is made for the most passionate fans of online casinos and internet gambling. We cover everything: from popular gambling world events and trends to new casino slot game releases and reviews, you will find the latest news stories.