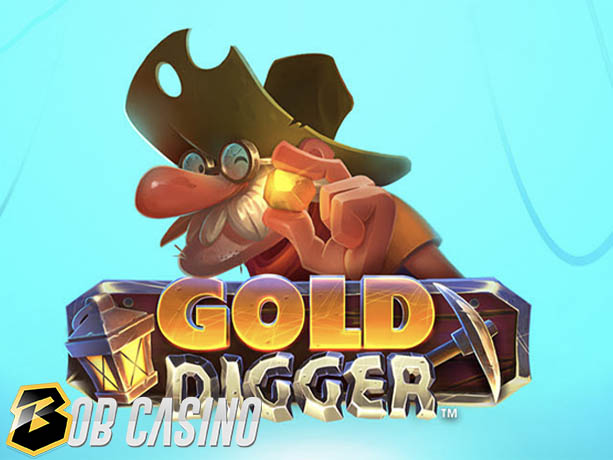 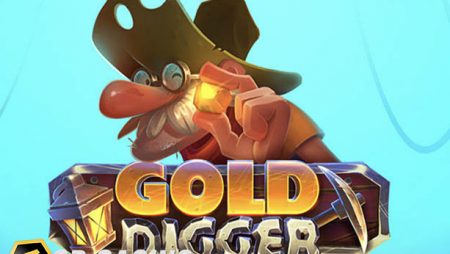 For those who are keeping score, Gold Digger is iSoftBet’s 100th slot release. Now, we mustn’t rely on the dictionary’s definition of the title when investigating what the slot’s all about. The same case for the Fortnite gamers; let’s pretend we have heard it for the first time. Anyway, let’s go for the literal meaning, which is the mining of gold ores from the ground. And leading the way in this is a gold pundit who goes by the name Gold Diggin’ Gus who’s armed to the tooth with a pickaxe, dynamite sticks, as well as a detonating plunger device.

On to the slot’s first impression, Gold Digger is among the few modern-day slots that launch to an opening scene. The one-toothed Gus rolls down a mineshaft in his minecart and lets out a shriek of laughter right before landing beside a typical 5X3 grid where the spinning action is set to take place. Though he is puffing and panting because of that exhausting ride, his broad smile and raised hands indicate that the only thing holding him back from the day’s work is you not setting the reels in motion. Before doing that, however, you must dig deeper to find out what the iSoftBet math model experts did with this brilliant skin after it was handed to them by their seasoned graphic designers.

It will increase your riches as much as it will make you laugh. Play the side-splitting Gold Digger Slot here for real money or enjoy a free demo below:

As with all the slots they have released lately, iSoftBet goes for the uncluttered look here. The bankroll balance and total bet reference tab just below the playing area are translucent, and so are the 3 controls levitating on the side the play area. Use the poker chip-shaped button to alter your bet, after which you should start playing with the spin button or the auto-spins setting. Important to note, players can switch between a coin and cash-based win evaluation algorithm by clicking on the bet displayed on-screen.

Moving on to the stats of the mathematical model driving the slot, Gold Digger is a standard volatility slot offering a slightly above-average RTP of 96.0%. Drilling a little further, we found a high hit frequency rated at 3.5/5, which means that a win is just about guaranteed in every five spins. This was confirmed during our test run when we landed €765 in two of our first five spins with the max bet (€20) in play. That sure sounds bizarre, but the one-toothed fella was to thank because he did something with his detonator, which we will discuss in detail later. For now, let’s break up the paytable.

On the low side are J through A card royals, which rack up a mere 4X at their best. These are followed by the high-pays, which include a pickaxe, lamp, minecart, and the man of the hour himself, Gus who is the top dog among the regular pays with rewards of up to 25X. There is also a wild which substitutes all the aforenamed symbols to complete a winning combination. As usual, wins are awarded when 3 or more of-a-kind are landed on any of the available 20 paylines.

Gus can Gas Up your Wins!

After a couple of spins, you realize that Gus isn’t just there to spectate the reels spin as he celebrates your wins. On a random round, he can use his tools to award symbol upgrades, as well as transformations into wilds or gold nuggets.

Speaking of gold nuggets, let’s see what they do.

5 gold nuggets landed anywhere on the grid award the Gold Link Re-spins. This is Gus’ happiest moment as he finally gets to a chance to give you a tour through the gold mine’s veins.

The player is teleported to a different 5X6 gaming screen with a partially locked upper section. Cashable Gold nuggets are already scattered on it, but you are awarded 3 free rounds, during which you should try to land more. Here comes the good news; whenever you land a nugget, the free rounds count resets to three. And that’s not all because gold nuggets are not the only symbols that can land here. You can land blue, green, red, and purple gems, which give you a chance to unlock the grid fully, bump up the value of the gold nuggets, increase the free rounds count, and boost the round’s win multiplier with up to X10 respectively.

Gold Digger is entertaining from the word go. It is the kind of game that you keep on spinning not only because of the abundance of wins but also because of how flawlessly the animations sync with the gameplay.

As for the potential, the best possible scenario in the base game would be Gus occupying all positions on the grid, which would trigger a gross win multiplier of 500X (25X on 20 paylines). Not many slots can brag this level of magnanimity this early. Moving on to the bonus round, how far the instantly cashable gold nuggets’ values can go is anyone’s guess, but we bet they can’t exceed five times your bet judging by how our test runs went. Let’s assume you unlock all the 30 spots and manage to fill just half of them with gold nuggets valued at 5 times your bet with the max bet in play (5×20), and that you trigger the max booster multiplier for the round (10X). That will amount to €15000 (100 X 15 spots X 10), easy money. Things can even be better than that as the win cap by the developer hints that a single round can yield up to 8230 times your bet!