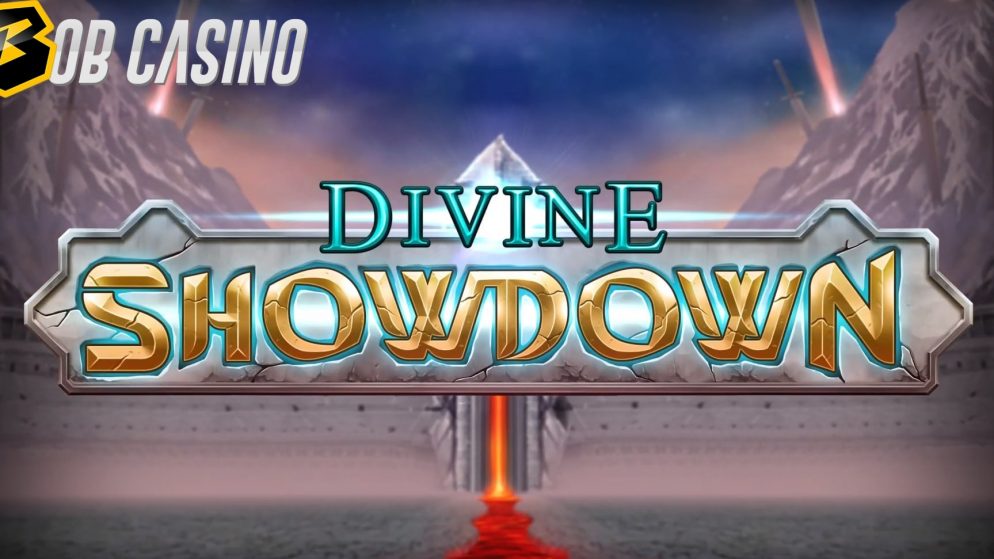 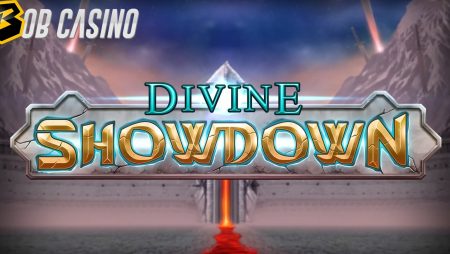 In battlegrounds beyond our world, 4 gods of the old from different pantheons gather for epic battles in Divine Showdown, the brand new slot release from Play’N Go. The gods in question include the burly Thor of the old Norse myths, the monkeyish Wukong from China, the wise Athena of the Greek pantheon, and the ghostly Anubis of ancient Egypt.

Just like in Smite, probably the first game to successfully bring together deities from different ancient backgrounds, or Power of Gods, you will experience a third-person-like perspective that puts you right in the center of the action as the featured gods take on each other; only this time, you will get to reap untold treasure for your endeavors along the reels!

Witness the battle of the gods! Play Divine Showdown for money or try out the free demo of the slot:

Set on a volcanic mountain summit with huge swords planted on it, Divine Showdown is a 5X3 slot with 20 paylines to play with. As soon as you use the bet selector at the bottom of the page to set your preferred stake, you should be ready to go with the large spin button on the bottom right side of the grid. You can also select up to 100 automatic rounds with the auto-spin button adjacent to it.

Once you fire up the reels, Hercules, Wukong, Athena, and Anubis will storm reels alongside the hackneyed low-paying blackjack icons to reward you with base game rewards of up to 16X. To boost this win potential, the multiplier vault at the top of the grid will open at random to reveal random multipliers of up to 10X. Keep an eye out for the wild sword as it will act as any regular symbol upon showing up.

Wukong, Anubis, Athena and Thor on the title screen, showcasing the different features that they can present during the Power Spin.

During the game, a god can make an appearance to power up the imminent re-spin with their special ability.

With his legendary silver-polished staff, Wukong causes occurrences of 1 to 2 wild reels. Using his self-engineered device to summon terrestrial powers, Anubis turns all appearances of 1 or 2 symbols wild. With her battle spear, Athena comes in to synchronize three reels with chaotic bolts of lightning. Finally, Thor uses the power of his mighty hammer to transform all appearances of the other gods into his.

A sophisticated symbol that merges the 4 cultures with a Norse helmet, a crescent moon, an ankh, and a Greek cross is the scatter. Line up 3 of them to activate an unlimited free spins session, where you will get to choose one of the gods to represent you in a battle against the remaining three… You really shouldn’t have any trouble selecting your champion as you have already witnessed what each of the gods can do during the power spins.

Before a free spin plays, the battle reel spins to decide the action. If it lands on the re-spin, your Power Spin will play. If it lands on a god symbol, a battle will be activated against that god.
To fight, the gods will occupy positions at opposite sides of the grid and compete for the most positions on the grid. If your god wins, his or her Power Spin will play. If your god loses, one life will be subtracted from the 3 counter health meter, bringing you one step closer to the end of the session; a power spin with the rival god’s power will then follow.

Play’n Go’s Divine Showdown is a fascinating addition to the slotsverse not only because of its adrenaline-pumping action but also because it is the first slot ever to crossover different mythologies. To be honest, we are so excited for you to jump into the game and play god. See you in battle!

NEXT RELEASE COMING 29th OF JULY!
50 mins ago

Konami Gaming cabinet retains top rating
50 mins ago
Recent Comments
Categories
Recent Posts
18+
Gambling News from NewsCasinoNew.com is made for the most passionate fans of online casinos and internet gambling. We cover everything: from popular gambling world events and trends to new casino slot game releases and reviews, you will find the latest news stories.