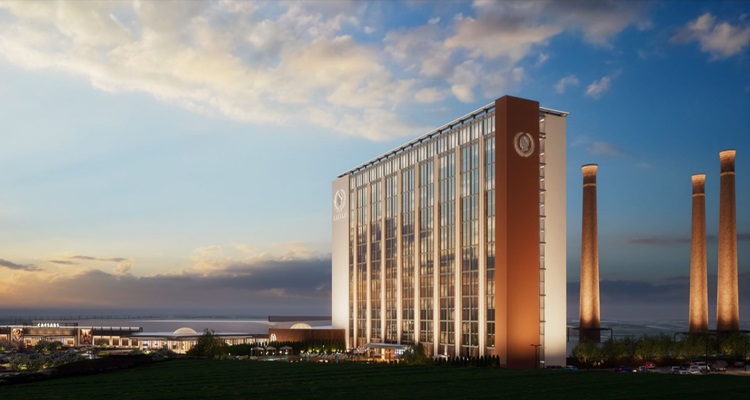 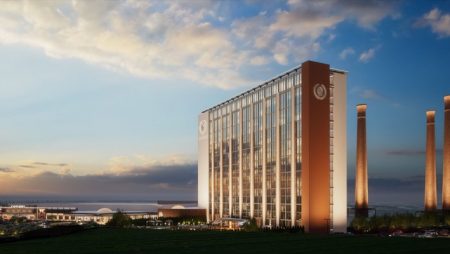 In November 2021 referendums, voters in the independent city located along the southern border of the commonwealth overwhelmingly approved Caesars Virginia, which was at that time estimated at roughtly $100 million less than its current development cost.

Plans for the property include an 18-story hotel with 500 Caesars-branded rooms, an increase of 200 keys from what was initially anticipated in the Development Agreement, a four-story parking garage and a total of 40,000 square feet of meeting and convention space, including an entertainment venue that will accommodate up to 2,500 guests.

As for gaming, the casino, which the Las Vegas-based entertainment company anticipates will open in late 2023, will reportedly feature 1,400-plus slot machines and table games, a Caesars Sportsbook and 25-table WSOP Poker Room.

Other amenities include a spa, pool area and fitness center, and restaurants and bars. A couple of the restuarants, according to Robert Livingston, senior vice president of development with Caesars Entertainment, will have Michelin star chef Gordon Ramsay‘s name on them.

“We are looking forward to making you proud as we build this casino,” Livingston said, during a ceremony at the Institute for Advanced Learning and Research in Danville on Thursday when the architectural renderings were revealed. “We’re excited to be here, and it’s an exciting time for Danville and this part of the country.” Meanwhile, Danville Mayor Alonzo Jones called it a “milestone moment,” according to a source.

Jones, along with member of the Virginia House of Delagates, Danny Marshall (R-Danville), members of the city council and other city and educational officials were all on hand at the ceremony as representatives for Caesars Entertainment shared architectural renderings of the planned Caesars Virginia.

According to Dave Howryla, president of architecture for Marnell Companies, which is the architectural firm for Caesars Virginia, reportedly said…

“The Three Sisters [three brick smokestacks] are the best element on the site, and everything is based on them. They will be cleaned up and they will be the focal point,” according to a Special Publication to the Danville Register & Bee.

The Nevada-based casino architectual firm reportedly based the design of the casino on original images it obtained of the Dan River Mill, with the 18-story hotel designed lower than the Three Sisters, while a four-story parking garage is blended into the landscape to appear as two stories.

“Marnell pulled it off. We built a team and blended culture,” said Livingston. “Bringing Southern hospitality to Caesars is exciting, while Howryla reportedly called it a ‘unique challenge’ to bring the legacy of Caesars to the rich history of Danville.”

According to Livingston, construction will start sometime next week when the site will change from a brown site to a green site, begging with the water tower being torn down. Permitting will reportedly be obtained mid-November and the groundbreaking will take place in December for the anticipated late 2023 opening.

According to the official press release, the project will fill 900 construction jobs during the build, and 1,300 new operational jobs to the area.

In August 2020, when negotiations for the project were nearing completion, Danville City Manager Ken Larking said that based on estimates from Caesars and reviewed by New Orleans-based consulting firm Convergence Strategy Group, it is expected that by the third year of operation the project will “produce $22 million in state-collected gaming tax revenue remitted to the City of Danville,” supplemental payments in the amount of $12 million to the City, and another $4.2 million in sales, meals, hotel/motel and property taxes.