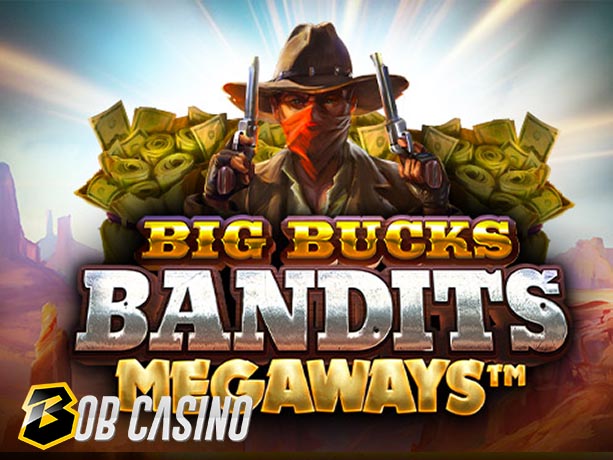 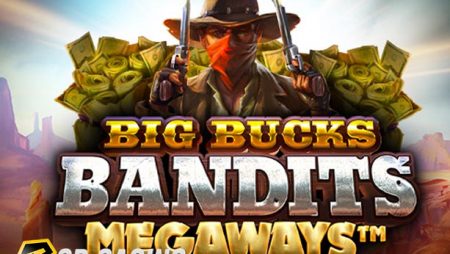 If there’s a slot developer that has really leveraged the Megaways-mania, it’s Yggdrasil’s partner, Reel Play. Come to think of it, it’s almost impossible to mention one of their Megaways slot that hasn’t become a hit. And while some such as Odin combine Megaways with their equally groundbreaking mechanic, Infinity Reels, some like Hypernova and Big Bucks Bandits are only driven by Megaways engine. Our focus today is the latter example, which comes as a new release to all Yggdrasil operators.

We are off to the American Frontier with YG Masters partner, Reel Play! Play Big Bucks Bandits for real money or in a free demo that is coming soon to Bob Casino!

There are no surprises when you launch Big Bucks Bandits Megaways. The Wild West-themed slot feel is almost tangible here, with sightings of guns, bandits, pocket flasks, & bison skulls, not to mention the Wild West-characteristic badlands in the background.

Getting in on the weightier issues, players get medium volatility setting to start with. That means that casual players can still latch on to the Big Bandits world for short-term entertainment. Secondly, players get a Return To Player percentage of 96%, which should not be a source of concern.

As is expected of a Megaways slot, the action takes place on six reels. There is also a horizontal reel above the grid, which adds an extra position to the second, third, fourth, and fifth reel. On each spin, each reel lands up to seven symbols, creating up to 117649 ways to win. That means landing a win is only a matter of landing at least three identical symbols from left to right, regardless of the position. It also means that it is possible to land wins as big as 10000x bet.

The symbols used here are the usual you find in a slot tackling the Old West theme. From bottom to top, value-wise, we find a pocket flask, bison skull, cacti, cowboy hat, pair of boots, pair of crisscrossing revolvers, horse, bandit, lady, and a cowboy. The latter mentioned is the premium and the only symbol that pays for combinations of two.  As you would expect, the values are not that great, as triggering the biggest of wins is a matter of landing identical symbols on as many win ways as you can.

Sherriff badges rarely lack in these slot types. Big Bandits is no exception, with it acting as the substituting wild when it shows up. Quite unusual, wild symbols can only show up on the top horizontal reel.

Bags filled with bounty cash can show up on the grid. These represent the scatters, and at least six of them in view trigger the named feature, where three re-spins are awarded.

Although it is played on the same grid as the base game, symbol pays for the regular symbols are not awarded. So, how do you win?

Well, you only need to watch out for the scatters as each has a 1-30x value, redeemable at the end of the re-spins. Also, each one that appears turns sticky and resets the re-spin count to three.

There’s more to take out of re-spins other than the cash bags. Players can land bronze, silver, gold, and platinum trophy jackpots, which award multipliers of 10, 50, 250, and 1000 times the bet, respectively. While bronze and silver trophy jackpots can be awarded severally in a re-spin session, the platinum & gold ones can only be awarded once.

Played in Wild West quick-draw shootout fashion, the Double Cross Gamble feature begins right after the Jackpot Heist Re-spins come to an end. It allows the player to gamble his/her winnings from the re-spins, which most won’t be willing to.

Those who would want to get straight to the re-spins can do so for sixty times the bet. Of course, this feature may not be available in all jurisdictions.

Big Bucks Bandits is a solid slot for two reasons. The first is the base game, which avails all the benefits of the BTG-patented Megaways Engine, the most important one being massive win potential. The second reason is the Jackpot Re-spins, which are all about offering players an alternative of winning big without relying on Megaways like in the base game.