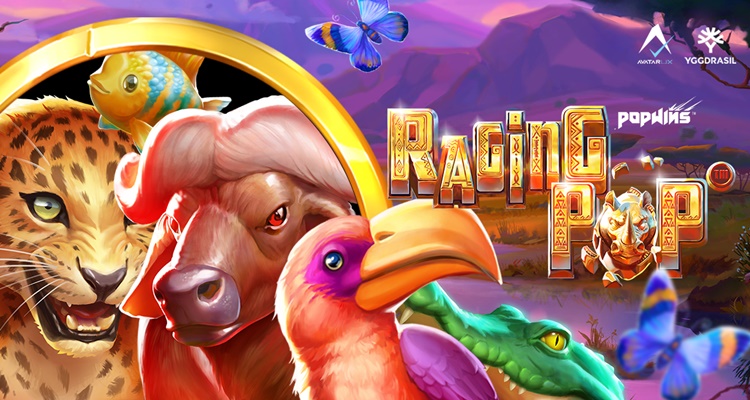 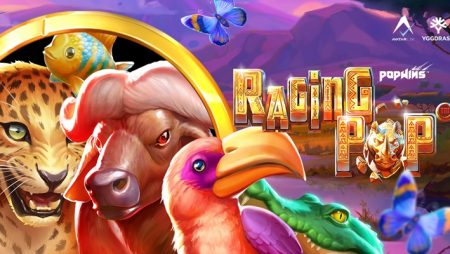 YG Masters partner AvatarUX has added yet another PopWins game to its growing portfolio, with RagingPop the Malta-based studio’s eleventh title powered by the unique mechanic and launched across Yggdrasil‘s wide-ranging operator network.

The African wildlife-inspired video slot is set in the deep savannah where the mainly grassy landscape is scattered with acacia trees and such, making a perfect backdrop for the game’s 6×4 reel set which is loaded with animals. Here, the size of the grid can expand up to 7 rows high thanks to PopWins in either free spins or the Raging Rhino feature, which can boost win ways from 8,196 up to 235,298. The highly volatile slot has a 96.34 percent RTP and stakes range from 20 p/c to £/€40 per spin.

Symbols include J, Q, K and A card suits as low pays; butterflies, fish and birds for mids; and crocodiles, buffalo, and leopard highs. The highest value symbol is the rhino and they are worth 15x the bet for landing six-of-a-kind. The other three high value symbols pay 5-6.25x the bet for the same six lined up, while the mid-ranges are worth 3x the stake for six and the bottom rung pay 1-1.5x the same way.

Helping to complete winning combinations, Wilds substitute for any pay symbol but only appear during free spins. Appearing only the base game, the Bonus symbol has no payout value and landing three or more triggers free spins.

PopWins creates an enormous number of win ways in free spins or the Raging Rhino feature because matching symbols pay from BOTH directions, starting from the respective -left or right side- outer reel.

At every spin it is possible to trigger the Raging Reel feature. When that happens, rhinos will rampage across the screen, increasing the height of reels and adding multipliers to the board which can be as high as 550x.

And as mentioned, during base gameplay, the PopWins mechanic sees the reels reach up to six symbols high, and in the bonus they can hit seven, helping to boost win potential. Also, landing at least three scatter symbols activates the free spins mode, which in turn launches a multi-stage gamble mode. There, players can choose to spin a Gamble Wheel, and if successful, increase free spins. Players who have multiple successful spins can win as many as 30 free spins.

The reel grows progressively (starting at 4-high to 7 max height) during the bonus round, and for every 10 consecutive free spins, the reels grow by +1 symbol in height, and stay that way for the remainder of the feature.

Commenting on the new release, Nicola Longmuir, Chief Executive Officer for AvatarUX, said “RagingPop™ is “another exciting addition” to their portfolio, and they are “thrilled” to launch it across Yggdrasil’s “broad network of operators.”  The CEO adds that it is “another strong milestone” for them, and they look forward to seeing how their collaborations “continue to bear fruit.”

More about:  Gamingtec just Signed a monumental and exciting Agreement with Red Tiger

AvatarUX released their first game in partnership with YGS Masters back in October 2019, with Lilith’s Inferno. Since then, the talented developer has released 11 hit games, including the most recent MonkeyPOP, which preceded the current launch, and another PopWins tittle, CherryPop Deluxe, the revved-up sequel to the original from October 2020, that is due to hit the network on September 12th.

“AvatarUX is a standout studio in its own right and it’s a fantastic partnership for us that brings innovative content to players across the world. We can’t wait to see how operators receive the latest PopWins™ creation,” read a statement from Stuart McCarthy, Head of Product & Programs for Yggdrasil.