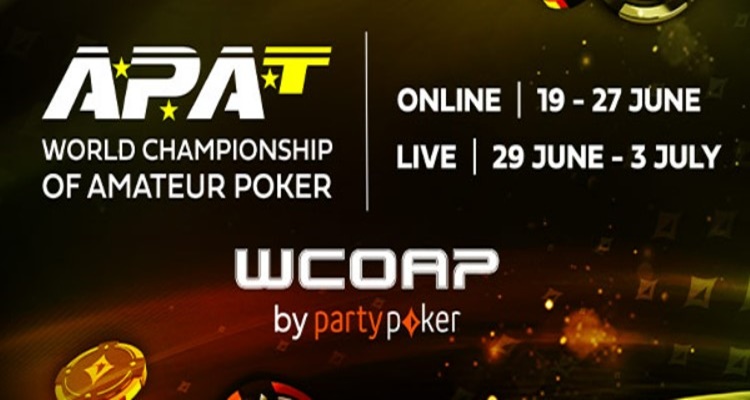 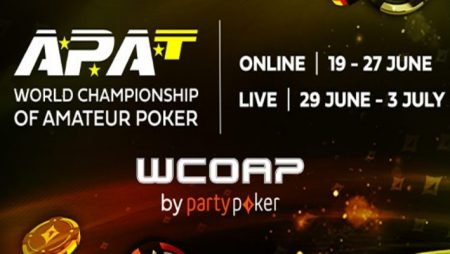 The Amateur Poker Association & Tour (APAT) kicks off the World Championship of Amateur Poker (WCOAP) today, with gameplay starting at partypoker. Once the online section is completed, players will head to Dusk Till Dawn to compete in the live section of the event.

Details of the Series

The APAT is known for offering online freezeout events, with players having access to two of 12 online events today. The first two tournaments are an 8-Max KO and a PLO8 tournament. Each one has a $55 buy-in and the starting time is 8:05 pm BST.

The 8-Max KO event has a guaranteed prize pool of $40,000 while the PLO8 event features a much lower pot of $7,500. Other events on the schedule will include PLO along with 6-Max No-Limit Hold’em, Mix-Max, turbos, and Fixed Limit Hold’em. Each event has a $55 buy-in and includes a nice blind structure that will suit amateur players.

The Championship event is scheduled for June 26, with a $75,000 prize pool. The buy-in is $109 for this event. Online poker players are given 100,000 in starting chips and the blind level will change every 10 minutes.

Players can compete not for satellites to the WCOAP Main Event. With buy-ins set at a super low $0.33. The satellites can be found at partypoker right now with several options on offer.

Moving to Dusk Till Dawn

The online series will continue through late June at partypoker and then the WCOAP heads to Dusk Till Dawn. The live portion of the series will take place from June 29 to July 3. There will be more than six events on the schedule including the Main Event.

Players can go ahead and buy into live events by utilizing holding tanks in the partypoker lobby. Dusk Till Dawn is also taking buy-ins or players can use the LuxonPay app to buy in. There is a cap for each live event, so players will want to buy in early to avoid missing out.

More about:  WSOP and GGPoker team up to launch new online poker site in Ontario

The APAT WCOAP is sure to be enjoyed by players from around the world online and in person. It will be interesting to see how each section of the series turns out, including who claims wins in each event and how many players turn out to compete.