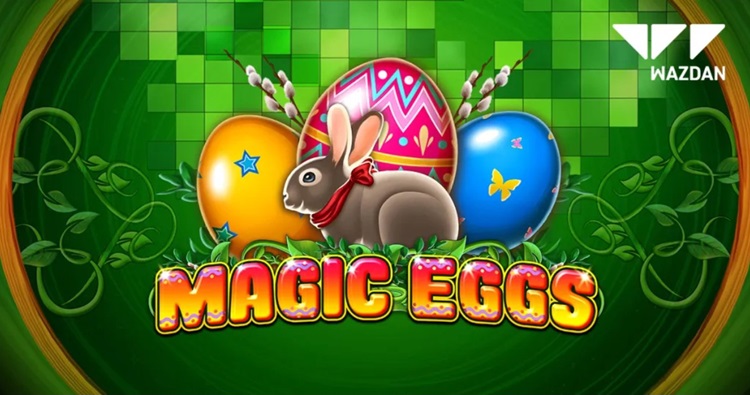 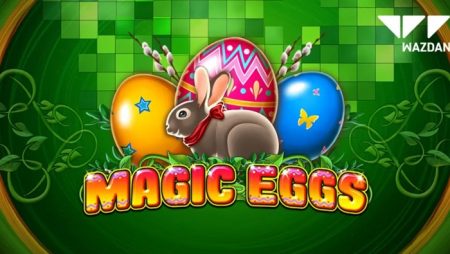 Hippity-hoppity, Easter’s on its way and what better way to celebrate the cheerful spring holiday than with Wazdan‘s latest online slot title, Magic Eggs! The new 3-reel, 3-row 5 paylines spinner has much more to offer than just adorable bunnies and expertly colored eggs, the game comes with a whole basketful of fun and a variety of prizes, including a maximum win potential of up to 40x the bet.

A lush green meadow is home to this spring-inspired release that comes complete with a 96.41 percent RTP, a Special Bunny Symbol and a Unique Gamble feature, perfectly suited for the three-reel grid.

Wins are formed on five fixed paylines by landing three matching symbols from leftmost to right on consecutive reels.

The game’s lower paying symbols, which include eight artfully crafted eggs, will undoubtedly evoke fond memories of Easters past. Each of the eight has a unique design, with the four more elaborately decorated eggs worth twice that at 16x the stake versus the four with the simpler patterns which pay 8x the bet for three-of-a-kind wins. There is no wild symbol in Magic Eggs.

Lower value egg symbols that land with the premium Easter bunny symbol attached transforms them into Special Symbols. Landing three of these symbols on the same payline delivers the game’s maximum prize of 40x the stake.

In addition, it is possible for players to double each win up to 7 consecutive times if they are successful in choosing the right Easter egg in the Gamble feature. Winning here happens when a player selects either the black or red egg and the card reveals the chosen color. You’ll want to proceed with caution though, as choosing the wrong color results in losing the win value displayed in the Current win counter.

Players can also choose their preferred game style via Unique Waxdan Features, including Volatility Levels, low, standard and high, Ultra Fast Mode and Big Screen Mode, which enables the game to be modified to suit their unique needs and requirements.

“Spring is upon us, and what better way is to celebrate it than with an epic Easter egg hunt?

“Magic Eggs provides our players with a light-hearted experience that can be enjoyed year-round. With this joyful release, we wish our players Happy Easter and good luck with the Magic Eggs hunt!”

Adding to the number of its regulated market debuts, earlier this month, Wazdan secured a license to operate in Michigan, which is the third U.S. state the online casino games supplier has secured a license. According to the slot developer, games such as Black Horse Deluxe, Larry the Leprechaun and player favorite 9 Lions, will be available in the Great Lakes State soon.

More about:  PlayUSA predicts football betting will soar to over $20 billion in 2021

In May 2021, the Malta-based studio was awarded a transactional waiver from the New Jersey Division of Gaming Enforcement (NJDGE) and six months after that received a Lottery iGaming Interim License in West Virginia.

Over the past 12 months, Wazdan has grown considerably, including agreeing a major commercial deal with American gambling giant Scientific Games Corporation, which recently announced the rebranding of its Gaming and iGaming groups as Light & Wonder.