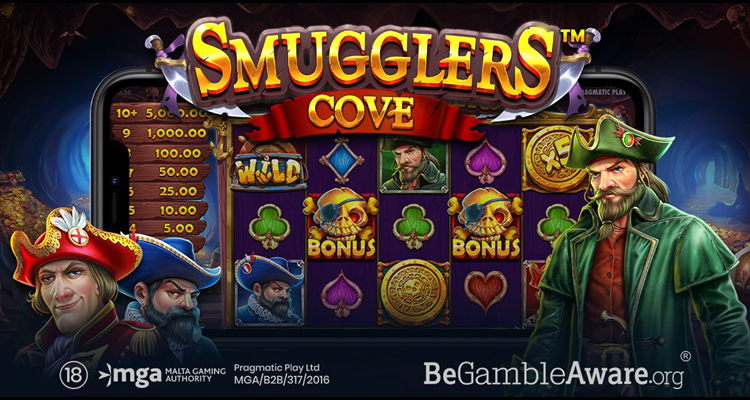 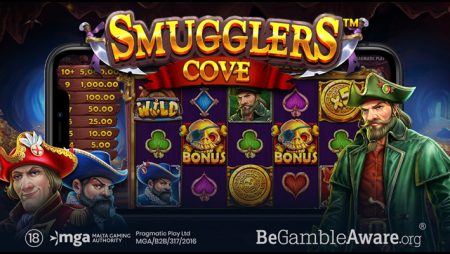 Ahoy, ye maties! It’s time to take a look at Pragmatic Play’s new pirate-themed video slot Smugglers Cove, which comes to us with 5 reels, 3 rows, 20 fixed paylines and seaworthy wins of up to 10,000 times the bet.

A high volatility slot, the action takes place on a shoreline of an azure sea where off to the left in the distance a pirate ship is anchored and to the right a cave which no doubt holds the booty that our pirate crew has plundered from unsuspecting ships.

Players will find the game developer‘s same vivid, cartoon style of graphics they’ve grown accustomed to, along with a default RTP of 96.50 percent. Not to be overlooked, choosing the Ante Bet feature boosts the stake by 25 percent, subsequently doubling the chance of triggering extra spins. Wins are awarded when players match at least three regular symbols from the leftmost reel moving along the paylines toward the right, while treasures from 0.20 credits to 100 credits per spin can be stowed away.

Lower paying symbols include blue diamonds, green clubs, red hearts and purple spades colored card suits, which will pay 2.5x the bet for landing a line of five. And premiums including a golden smuggler, blue smuggler, red pirate smuggler and green pirate smuggler pay from 10x to 100x the bet when landing a combination of five symbols.

Representing the wild, the ship’s wheel substitutes for all other symbols with the exception of the bonus symbol and pays 100x the bet for a combination of five on a payline. Gold coin symbols activate instant wins when a player lands five or more during the base game.

To activate the instant win Treasure Bonus, a player must land five or more coin symbols during base game play and five during extra spins, for instant wins based on the number of coin symbols on the board. Wild symbols substitute for coins and count toward the total. The more scatters that hit, the bigger the prize, with from 5 to 15 coins earning wins worth from 1x to 1,000x the total bet.

The skull and crossbones scatter triggers the free spins bonus round by landing three of the symbols on reels 2, 3, and 4. Next is to spin a prize wheel, collecting 8, 10, 12, 15, 0r 20 extra spins as well as a win multiplier for the round. During the bonus, the Treasure Bonus can also be activated with increased win amounts as mentioned above.

Keep in mind that Super Wild Coins and Super Coins do not appear during the feature. Retriggers, however, are available when three bonus symbols land and award an additional 8 extra spins. The round ends when spins are exhausted or the max win cap at 10,000x the bet hits.

“We are thrilled to be entering the festive period with such a strong collection of slot titles, headlined by our new release Smugglers Cove™. As always, we’re keen to see how our global audiences react to the new release and expect to see them enjoy the fantastic rewards on offer.”