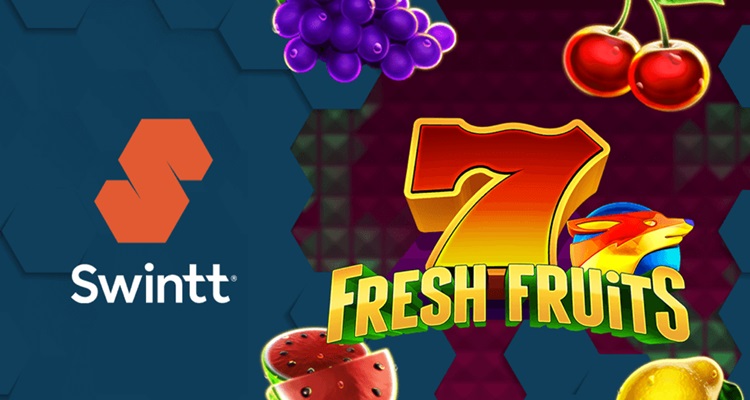 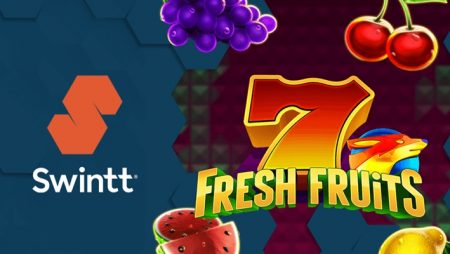 Casino software provider Swintt has further strengthened its popular collection of Premium slots after making its brand new title, 7 Fresh Fruits, which comes complete with expanding wild re-spins and an innovative both-ways-pay mechanic, available at any of its online casino partners.

This latest addition to the fast-growing Malta-based game provider’s Premium portfolio combines simple gameplay with classic slot symbols, rewarding bonus features and wins of up to 1,000x the stake!

Like all Swintt games, the 5-reel, 3-row and 10 fixed paylines slot is produced in HTML5 technology, which means it can be played on all types of desktop and mobile devices, regardless of their operating systems. Players will also find the retro aesthetics that are typical of land-based fruit machines, along with a sprinkling of modern bonus features.

Symbols including ripe cherries, plums, grapes, lemons, oranges and watermelon fill the reels atop a prismatic backdrop, where on each spin players have an increased chance of winning courtesy of wins that pay from both left and right. So, landing any three matching symbols starting from either side of the table awards a payout, while special wild symbols depicted as foxes on the run on the central three reels of the slot make the possibility of scoring big even easier.

Collecting one of these foxy wilds causes it to expand and fill the entire reel that it lands on while also triggering the Wild Fox Feature. When that happens, each of the existing payline wins is added together before the game awards players one extra spin.

Any additional wins that land after the extra spin is also added to the total prize, however, if a second fox wild symbol lands, the player will receive another extra re-spin. This makes it possible to extend the feature two more times, which means all three of the central reels appear wild.

Having the entire center of the gameboard covered with expanded wild fox symbols increases the possibility of landing a Full Table win, with a Full Table of Lucky 7s resulting in the game’s 1,000x max payout.

More about:  Casino pair calling for Scotland to allow their properties to re-open

Ramping up the excitement, the game also includes the developer’s signature Gamble feature, which can be activated after any winning spin. Choosing this option allows a player to try to predict either the suit or color of a hidden playing card. If they guess correctly, their current prize is either doubled or quadrupled, respectively.

“With their award-winning mix of iconic slot symbols, simple gameplay and rewarding bonus features, Swintt’s collection of Premium slots are a huge hit with players in regulated markets around the world.”

The CCO explains that their latest addition “aims to build on that success by providing players with an innovative both-ways-pay mechanic and expanding wild re-spins that can lead to huge potential payouts. We hope they’ll enjoy taking it for a spin at any of our online casino partners this month.”

7 Fresh Fruits follows the launch of Swintt’s third release of the new year, with its ground-breaking jackpot slot Aloha Spirit Xtralock already proving to be a hit with players!

More about:  Everything You Should Know About Online Casino Gaming Licenses

In the past year, the recent recipient of the “Rising Star in Casino Innovation/Software” award at the 2021 SBC Awards held at Evolution London on December 24, has gone from “strength to strength,” and is now recognized as a leading game provider in the industry. Licensed by the Malta Gaming Authority (MGA) and the Swedish Gambling Authority (SGA), Swintt offers a collection of 120-plus HTML5 slots and live casino games.