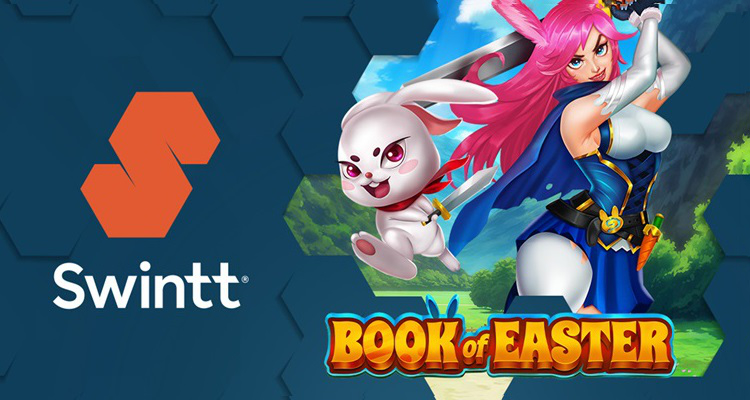 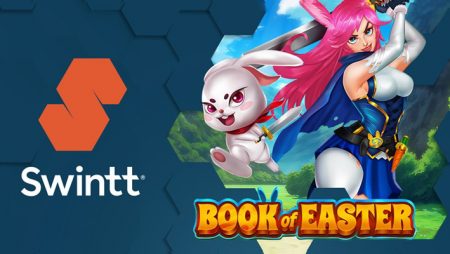 Casino software provider Swintt has served up another entry in its most popular slot series after launching, Book of Easter, just in time for the popular holiday celebrated around the globe.

This five-reel, three-row, 10-payline “Book” game pairs players with a saucy anime warrior with pink hair and her mischievous floppy-eared sidekick as they go forward on an eggcellent adventure, cracking into potentially lucrative Free Spins that feature a special expanding symbol.

The Swintt Select game’s backdrop is a trail through a lush valley that is flanked by mountains and on either side of the path’s wooden fences are colorful easter eggs. In addition to the two main characters mentioned above, you’ll find carrots and a variety of expertly decorated Easter eggs serving as the HTML5 game’s symbols.

Players will also want to be on the lookout for the large book with a green inset and golden rabbit on the cover. Like all of the games in the “Book” series, this serves as the game’s scatter symbol. It substitutes for all symbols and if you land three or more anywhere on the reels in one spin, it’ll trigger the game’s main bonus feature and you’ll also earn an additional multiplier win.

Activating the “Book” feature see players awarded eight Free Spins to start, with a regular base game symbol randomly selected to expand. Whenever the chosen symbol lands during Free Spins, there is a possibility that it will increase in size to completely cover all three positions on the reel if there is a chance that additional winning paylines could be created. Furthermore, awarding wins happens the same way for non-adjacent symbols.

It is also possible to retrigger the Free Spins feature if a player lands at least three subsequent scatters. If that happens, the player is awarded eight additional games along with the corresponding multiplier. A random expanding symbol feature can also be triggered by players who manage to collect three of the special golden keys are collected, boosting their chances of some nice wins.

Whenever one of the golden keys appears, it is stored in the collection meter located above the reels. When and if a player acquires three keys, a single expanding symbol is selected, and players can increase their odds of hitting the game’s max 4,434x multiplier.