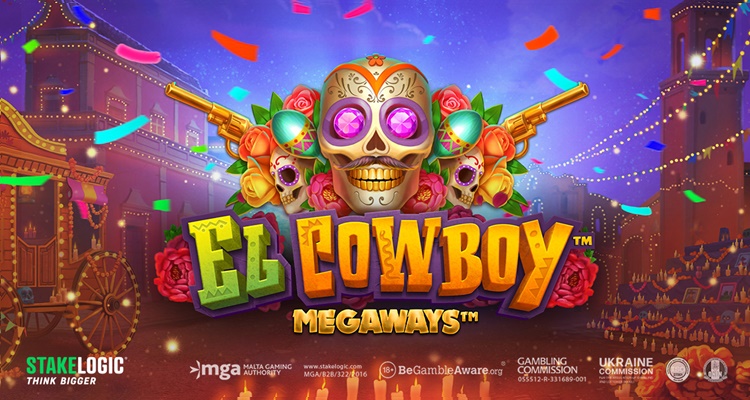 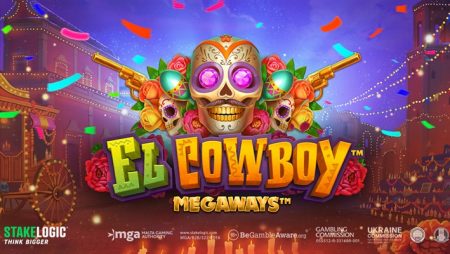 Online slots developer Stakelogic has released its latest title, El Cowboy Megaways, and like its counterpart, El Patron, which was launched in February, is Latin American inspired. This one, though, has all the feels of a Quentin Tarantino-directed Day of the Dead/Western, and it works.

In addition to the unexpected mix of themes, the high volatility blockbuster video slot has “all kinds of wilds and multipliers,” and offers players the chance to “ride off into the sunset with a sack full of bounties and big wins.”

Billed as possibly one of its “most explosive games of the year,” players can expect plenty of cowboy and Day of the Dead visuals in the hot and hazy Mexican town that serves as the backdrop to a 6-reel Megaways grid that holds 2-7 symbols each. There are also a pair of bonus reels, one above the regular reels and one below it.

Win ways max out at 117,649 and players can bet from 20 p/ to £/€100 per spin, while this online slot’s theoretical minimum RTP comes in at 96.21 percent. The game is playable on all devices, however, we found that the game is somewhat cramped on a mobile screen, most notably when played in portrait mode.

The innovative developer has added a total of 10 symbols here, with low pays consisting of a cigar cutter, a cigar, brass knuckles, a gun and a liquor bottle with two shot glasses, while a five individual character symbols comprise the premiums.

Players will score from 0.6x the bet up to 12x the bet by landing from three to six-of-a-kind symbols from left to right on consecutive reels. The cascade feature sees winning ways removed from the board when they land, with new symbols dropping down to fill in any empty positions. The process continues until no new wins appear.

There are 3,125 win ways with each spin in the base game and a max win of 25,000x the player’s bet, making it possible to ride off into the sunset with some big-time bounties!

Wild symbols, meanwhile, substitute for all regular symbols and can land or be activated on all but the 1st reel. Part of the Action Feature, there are also two bonus reels situated above and below the reels. Action Symbols are contained on the top, and Wild Symbols are on the bottom reel. If you’re lucky enough and the pair of bonus reels align, one of the following three modifiers are triggered:

Next up is free spins, and landing 4, 5, or 6 scatter symbols will get you 15, 20, or 25, respectively. During the bonus round, one of the extra reels has the Dynamite Action Symbol, while the other has the Wild that can either be a regular Wild or a Multiplier Wild action, when they align on the same reel. When that happens, they trigger and award the following:

For those players who get saddle bruised easily, they can choose the Buy the Bonus with four different options to pick from. This free spins trigger can be had for 100x the bet, and select options number one which awards 15-25 free spins; options number two, where they are awarded the same number of free games with a minimum of 5,040 win ways; option number three with static 117,649 win ways and finally option number four which is random, awarding one of the previous options.

Commenting on the action-packed slot, Olga Bajela, Chief Commercial Officer for Stakelogic, said, El Cowboy Megaways is “a Western-themed slot like no other.” The CCO says the action is “explosive,” with its Wilds, Multipliers, Free Games and more “giving players the chance to ride into the sunset with big win bounty of their own.”

“The action-packed gameplay has been combined with gritty artwork and an authentic soundtrack to take players to the heart of the Wild West and make them feel like a true cowboy. This is yet another great addition to our market-leading video slot portfolio.”