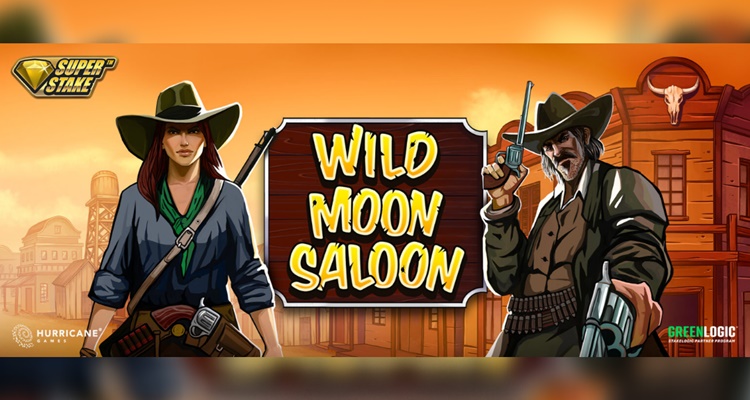 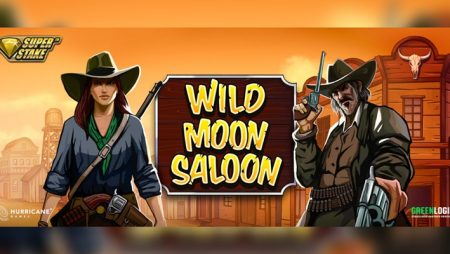 Lauded as one of Stakelogic‘s “most explosive slot launches to date,” Wild Moon Saloon was developed by British studio Hurricane Games as part of the Greentube subsidiary’s successful Greenlogic Partner Program and includes a heaping helping of features such as Super Stake, Wild Modifiers, Free Spins and a Mystery Bonus.

Played on a 5-reel, 4-row gameboard with 50 paylines, the highly volatile, action-packed video slot has a 95.80 percent RTP and invites players to saddle up to the “wildest saloon in the wild west” where a x5,000 max multiplier can deliver life-changing bounties. However, players will have to be satisfied with spinning the reels on the dusty dirt street outside of this watering hole until they trigger free spins.

Here, win lines pay from left to right, with J, Q, K and A card royals worth 2-3 times the bet for five-of-a-kind, while a flask and a bottle of whiskey creep to 3.5-4x the stake and hitting five-of-a-kind premium cowboy and cowgirl character symbols pay 6 to 12.5x the bet.

Players can mix things up a bit with the Mystery Bonus symbol, which can be activated at any time during the base game, or they can win or purchase free spins, while win multipliers, scatter symbols wins, and Wild modifiers can be added by way of a Bonus Pick feature.

Before free spins starts, to enhance the bonus round, players landing 3, 4, or 5 scatter symbols are awarded 8 free spins with the corresponding 3, 4, or 5 picks. they then choose from four types of downside-up cards revealing the following rewards:

This potentially lucrative pick game can be retriggered by players if they land two or more Scatter symbols while free spins are still active.

Another way to notch some big wins is via Stakelogic’s trademarked Super Stake feature which allows a player to double their bet to boost the chance of  triggering one of Wild Moon Saloon’s bonus features. Here, that increases the number the number of scatters that can land during base gameplay and the Free Spins bonus.

Furthermore, the Mystery Bonus can randomly trigger during any base game spin. When it does, it activates one of the Wild Modifiers for that spin.

Depending on the jurisdiction, players can choose to buy their way into the bonus round rather then get there naturally. The cost of doing so is x80 their stake, which guarantees 3, 4, 0r 5 scatters land in the same spin.

Not For The Faint-Hearted:

“This is one of our most explosive slot launches to date and takes the popular Wild West theme and packs it with more bonus action than players will ever have experienced before.

Wild Moon Saloon is absolutely not for the faint-hearted but for those keen to ride towards the Free Spins bonus can potentially claim one of the greatest bounties in online slot playing legend.”

Playable on any device, the game was developed by UK-based Hurricane Games as part of Stakelogic’s flourishing Greenlogic Partner Program, as mentioned earlier.  The successful platform allows developers to concentrate on game concept, assets and gameplay, while the provider develops game logic and handles the back-office integration.

In addition to Hurricane, current Greenlogic partners include London-headquartered studio, Jelly, along with NetGame Entertainment, Reflex Gaming, and Touchstone Games.

Inspired Entertainment Incorporated proposing PlayAGS Incorporated buy
5 hours ago
Recent Comments
Categories
Recent Posts
18+
Gambling News from NewsCasinoNew.com is made for the most passionate fans of online casinos and internet gambling. We cover everything: from popular gambling world events and trends to new casino slot game releases and reviews, you will find the latest news stories.