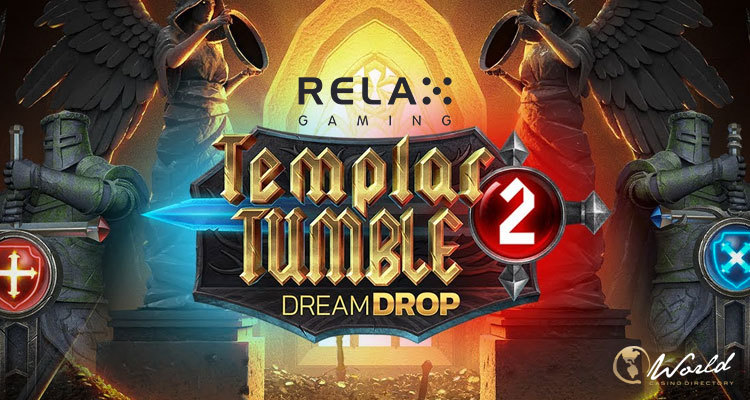 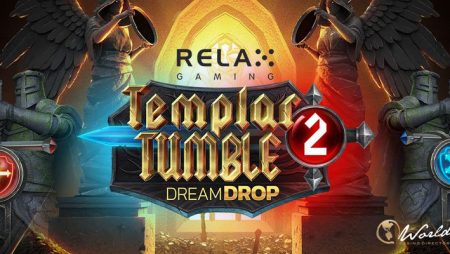 Sharpen your sword, bring your armor, and join Relax Gaming’s order of knights in the Templar Tumble 2 Dream Drop slot game. Its slot release Templar Tumble found a way to the players’ hearts, and the sequel is on its way to doing just the same.

The rules of the game:

During the base game, the player can see red or blue-framed symbols and blockers containing divine multipliers or mystery symbols. In this 6×7 slot, the knight is supposed to destroy five of them in order to be allowed to enter the deeper levels. This action will help raise a collection meter, which will later be changed for additional Free Spins.

When the player achieves the Free Spins round, the Win Multiplier and Mystery Reveal await them. At the end of every spin, the player has a chance to get awarded – all while the collection meter is still on its streak, without resetting between spins.

But the best feature of this game isn’t even mentioned yet. It’s the Jackpot Spin, which can be triggered at any moment, totally random, and can lead to different perks – and that’s where Relax Gaming definitely went above and beyond.

Spins can be played until one reel is entirely full of Dream Drop symbols – and that’s where the jackpot can be won. This slot has five jackpots: Rapid, Midi, Maxi, Major, and Mega.

Simon Hammon, CEO of Relax Gaming, said: “Our Tumble series has been an exceptionally strong performer, with Templar Tumble being a resolute fan favorite. Its sequel is set to continue in the same vein but with the added excitement of our Dream Drop jackpots to keep players engaged.

“Templar Tumble 2 Dream Drop has all the gameplay allure of its predecessors with a stylish new theme and features that fans old and new are going to love.”

An award-winning company on its way to success:

Relax Gaming was founded in 2010, and since then established its position as one of the industry’s leaders when it comes to B2B suppliers. This award-winning company has been recognized by many and awarded with Casino/Slots Developer of the Year at the SBC Awards, The Best Game Provider at the AskGamblers Awards, and Best Mobile Gaming Software Provider at the EGR B2B Awards.

With more than 4,000 online casino games and many partners that the company gained via its partnership programs, it is really an industry giant – and we can expect them to keep surprising us with its unique and thrilling games.