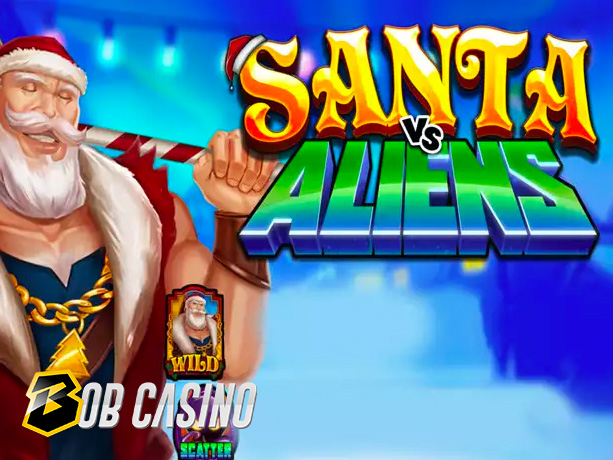 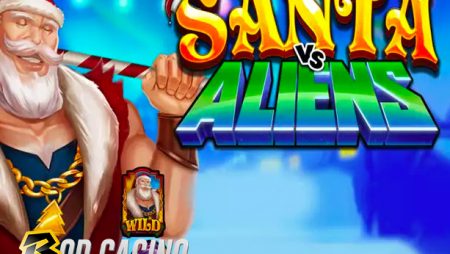 As the holidays begin, developers start releasing Christmas-themed slots. Swintt is set to release Santa vs Aliens, which is holiday-themed, but Santa in this slot has been depicted completely differently from what we frequently see. The slot plays out on a 5 by 3 grid with 20 winways. It also comes with bonus features such as free spins, sticky wilds, respins and wheel of fortune. Take a look at the full review of the game before you start playing.

Santa vs Aliens has the following game statistics:

Santa vs Aliens is set on a standard grid with 5 reels and 3 rows. There are 20 paylines on which players can create winning combinations for a chance to walk away with 200x the total bet. The return to player rate stands at 96.03%. Players need to note that this is a theoretical rate subject to change from one casino to another. Paired with high variance, players can achieve big payouts, but they occur less frequently. The max win is a bit disappointing, but there are free spins to look forward to along the way.

Players can start spinning by choosing any wager starting from a low of $0.20 capped at $100. A win is achieved by hitting 3 or more similar symbols on any paylines on adjacent reels starting from the left reel. The features on this slot are unique, including robot-like symbols, a hunter dog, an alien UFO, a friendly robot, a bell, an axe, a shotgun, a ray gun, a booby-trapped gift, an alien planet and a bomb-shaped bauble. The wild symbol is fixed at the centre of the reels and can turn into any paying symbol except scatters. The scatter of the game is represented by an alien UFO.

Santa vs Aliens is a holiday-themed slot, as the name suggests. As we often see, the main character, Santa, has more muscle than a fat belly. He’s shown holding a hammer just like Thor, and his main mission is to fight and defend against a possible alien invasion. In the background, we catch a glimpse of a snow-covered town with lanterns on the streets. The music is lively to go with the theme, and you can hear jingle bells in a sequence.

The feature is triggered by hitting 3 or more scatters. It then awards 5 to 20 free spins depending on the triggering scatters. It can alternatively carry a random multiplier ranging between 10x to 100x applied during check out.

You can set the feature in motion by clicking on the turbo button, enabling and disabling the function. Alternatively, you can activate the feature on a desktop by holding down the space bar for 2 seconds. Enabling this function shortens the length of the spins and speeds up the animations.

Santa vs Aliens: Our Verdict

The game is generally decent with an average RTP and several extra features such as free spins and different spin modes. The representation of Santa sets the slot apart from others with a similar theme in the market. If you are looking for a simple slot, check it out.