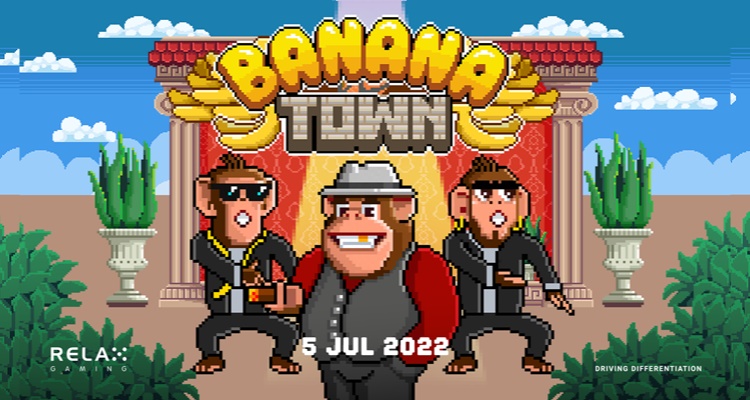 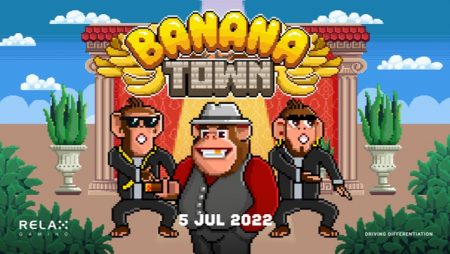 iGaming aggregator and developer Relax Gaming promises players an “unforgettable visit” when they head on down to Banana Town, where monkey mobsters are in charge. The game uses a scatter pays mechanic to generate wins, giving players the opportunity to benefit from potentially lucrative free spins and random multiplier upgrades on the way to a max win of 10,000x the bet!

The latest release from the provider, which follows its summer-inspired Blender Blitz slot, is highly volatile with a 96.12 percent RTP and a hit frequency of 18.45 percent. Played on a 6×5 grid, this unlikely, gangster-themed video slot has plenty of old-school flavor with its 8-bit graphics and retro style reminiscent of early 80s arcade platform video games such as Nintendo’s Donkey Kong. More than likely, old-heads will love this game.

Here, landing at least 8 matching symbols on one spin anywhere on the grid will get you a payout. Lower paying symbols include blue, green, red and yellow bananas, and are worth 0.5x for landing 8-9 matching. That increases to 1-4x for the higher pays represented by five different gangster monkey symbols. The boss monkey with the red background is the most valuable symbol, paying 4, 8, or 12 x the stake for 8+, 10+ or 12+ in view on the grid.

More about:  Embark on an Around the World journey with Endorphina Limited

No wilds are used in Banana Town, however, there is a dollar scatter, and landing three or more of them will trigger the Free Spins feature.

All of the game’s regular symbols have a multiplier associated with them, which is automatically applied to every win – doubling after each successful spin featuring that symbol.

This feature is also able to trigger randomly, and when that happens, at the start of each new spin, a random multiplier upgrade is assigned to a random number of symbols.

Players who are lucky and land at least three of the dollar scatter symbols somewhere on the reels are awarded eight free spins. For every additional bonus symbol that lands afterward, an extra spin is awarded.

Players who’d rather not wait for the required number of dollar sign bonus symbols to hit can pay 100x the bet to trigger the feature immediately.

Commenting on the new launch, Simon Hammon, Chief Product Officer for Relax Gaming, had the following to say in a company news release…

“Head on down to Banana Town for what we promise will be an unforgettable visit! This retro-style slot not only looks fantastic, but it also boasts some truly memorable features and mechanics. If you like big multipliers and impressive wins then we’re confident you’ll go bananas for this new release.”

The latest release, as mentioned, follows the launch of the provider’s 243-payways Blender Blitz summer slot, which has a 25,000x max win potential and is perfectly suited to players who prefer high volatility gameplay.

In other exciting news, Relax recently announced the first Mega Jackpot win from its Dream Drop Jackpots product, which was just launched on March 30!

The lucky individual won the Mega Jackpot – €997,779.17 – which is the largest of Dream Drop’s five prizes including Rapid, Midi, Maxi, and Major while playing Snake Arena Dream Drop with leading operator, Videoslots.

According to the St Julian’s-headquartered iGaming aggregator and content supplier, between those five categories, there have been over 330,000 individual winners since the product became available in late March. Among those wins, including the one Mega, a dozen were reportedly Major jackpots.