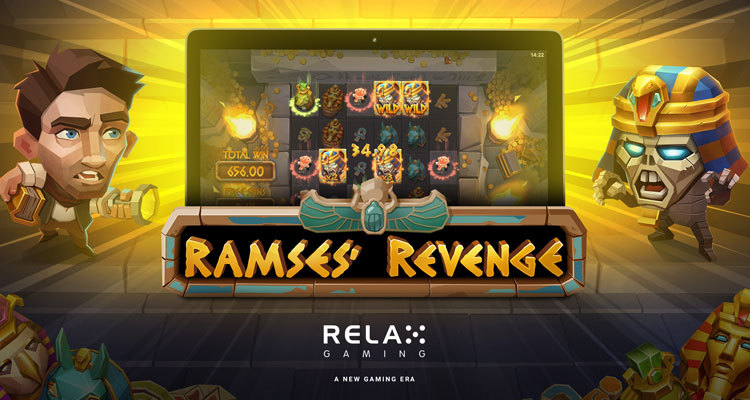 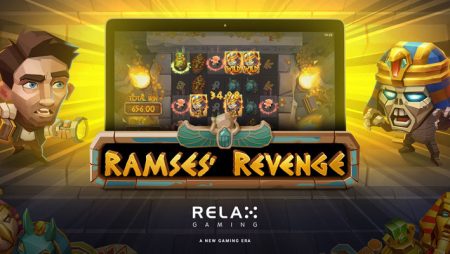 Halloween is fast approaching and Relax Gaming’s ghoulish new slot Ramses’ Revenge will ignite the spirit of the annual holiday as it transports players to the tomb of one of the greatest pharaohs of all time and where mummies come to life!

Ramses the Great seeks sweet revenge in this high volatility, 6-reel, 6-row video slot, which offers 4,096 paylines and symbols that include eight regular pays and the high paying gods Anubis, Sobek, Horus, and, of course, Ramses.

Designed by Relax to “offer an intense gameplay experience form the first spin,” the Ancient Egyptian themed game is packed with extra spins, a feature that sees wild mummies creep up on explorers, stealing their positions and awarding additional spins, multipliers and big wins!

Another exciting feature, the Mystery Sandstorm is randomly triggered and keeps player’s on their toes as Ramses wrath can strike when you least expect it, delivering players to a high-action bonus round which increases the winning potential even further.

Players either reap the rewards of Ramses Revenge during the extra spins round or choose to up the ante with the Buy feature.

In a company press release, Chief Product Officer for Relax Gaming, Simon Hammon, had a few words to say about the new game…

“Just in time for Halloween, Ramses’ Revenge provides a creepy, high-action slot experience, bringing together a familiar theme with fast-paced gameplay that will keep players on their toes.

“Relax’s signature low-poly graphical style and quality animations add to the engagement factor, creating a slot with wide-ranging appeal that will be a strong addition for our operator partners.”

The iGaming provider and aggregator’s latest title makes for an exciting addition to its portfolio and offers a maximum win of almost 50,000x and a 96.15 percent RTP.

Relax recently announced that following a year of substantial commercial success, over the next 12 months it will open seven new offices to accommodate its fast-growing workforce as it maintains its planned growth trajectory.

The supplier has already opened one new office in Gibraltar after securing a B2B gaming license from the Licensing Authority earlier this month and will soon establish a headquarters in Stockholm as a complement to its office in Malmö, further cementing its presence in the Swedish gaming market.

More about:  Microgaming rocks out with new Deadmau5 video slot

Other coming company changes include increasing capacity across its existing headquarters in Helsinki, Vaasa, Malta, Malmö, and Tallin where a new office expected to open next summer will have space to accommodate approximately 100 employees.

Meanwhile, this month Relax will relocate to its new Malta headquarters, making room for its team that has since January increased by 30 percent, which the company attributes to the “expansion of the partner, commercial, and operational teams.” In the last six months alone, the firm has partnered with Paf, Veikkaus, Paddy Power Betfair, GVC and Svenska Spel.

“People are our biggest asset.”

Commenting on the company’s success this year despite the disruption caused by the Covid-19 pandemic, Chief Executive Officer Tommi Maijala thanked all of Relax’s employees…

“It’s been an incredible year for Relax Gaming with significant commercial achievements across the business, none of which would have been possible without the hard work, passion and talent of our entire team. People are our biggest asset and when good people are let go elsewhere, we make it a point to see if they can find a home at Relax and help us achieve our goals faster.

“The fact that we’ve continued to hire throughout this challenging time demonstrates the health of our business and is a testament to our technical excellence, commercial appeal and our constant strive for progress.”