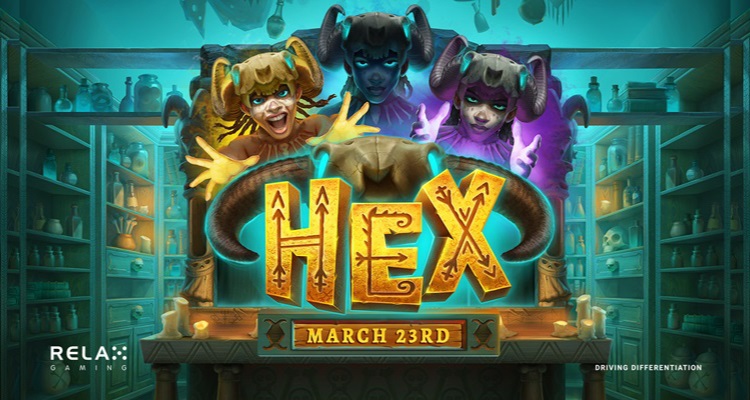 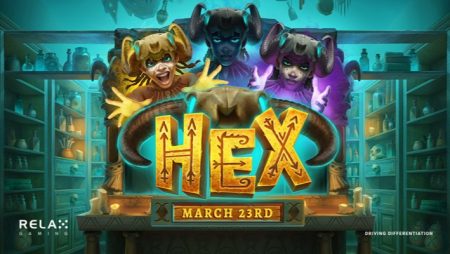 Magic and mystery await players on the reels of Relax Gaming‘s latest online slot title, Hex, complete with a spooky vibe and equally eerie soundtrack that set the stage for an expandable 5×3 grid in a creepy Voodoo shop with wooden bookshelves filled with potions, candles and a skull.

Sticky mystery symbols, mystery reveals and reels expansions help players navigate the unnerving establishment on their way to success and a max win of 25,000x in this high volatility video slot with a 96.43 percent RTP.

During base gameplay, the game’s 5×3 grid and 243 win ways expand to 5×4 and 1,024 ways to win when extra spins are active. And wins are formed by landing between three and five of the same symbols on adjacent reels starting from the first reel on the far left of the grid.

There are 10 regular pays on Hex’s paytable, with five lower value symbols consisting of a test tube with blue potion and four card suit-shaped bottles of potion. Hitting five-of-a-kind low pays is worth 0.5x to 1.2x the stake. You’ll want to aim for the bird’s foot, tarot cards, snake, voodoo doll or the four-horned sheep skull, though, as these premium symbols are worth 2x to 10x the bet for five-of-a-kind.

The game’s wild symbol, meanwhile, appears on all reels and substitutes for all symbols. If you’re lucky enough to land five of the wild symbols across the reels, you’ll receive 20x the bet. Landing 3, 4, or 5 book scatter symbols awards 7, 10, or 15 extra spins, respectively. During the bonus round, +1 additional extra spin is awarded for every scatter symbol that hits.

Before the extra spins start, an extra row is added to the reels, which boosts the number of win ways to 1,024, as explained earlier.

Available in both the base game and extra spins, the Mystery Reveal feature sees the possibility of a Sorceress symbol appearing on the far right reel. When one lands, it changes itself, and every symbol marked with a frame around it into the same symbol. Landing a Silver Sorceress transforms symbols into an identical pay symbol, whereas if a Golden Sorceress lands, the marked symbols convert into Wilds.

Symbols that have been converted have their positions remain marked for the entire extra spins feature. This allows the reel area to steadily fill with marked positions during the round. Matching symbols that land on at least three adjacent reels, starting from the far left reel, is considered a pay way win.

“Magical and mystery-themed games are often the most exciting and engaging to develop. As this was no exception, we’re confident that excitement and engagement will be felt by players when they spin the reels as well.

“This spooky slot delivers unforgettable gameplay coupled with a generous RTP and max win. We’re delighted to offer this unique title to our players and we’re sure that they will enjoy the smooth yet gripping experience.”

Earlier in the month, Relax increased its presence in the Serbian market after agreeing a content deal with Meridian Gaming. Through the new partnership, the iGaming aggregator and supplier’s player-favorite titles ranging from the classic Aztec-themed Temple Tumble and the blockbuster hit Money Train 2 to the recently launched Beast Mode, will now be accessible to the sports betting and iGaming operator’s international customer base.