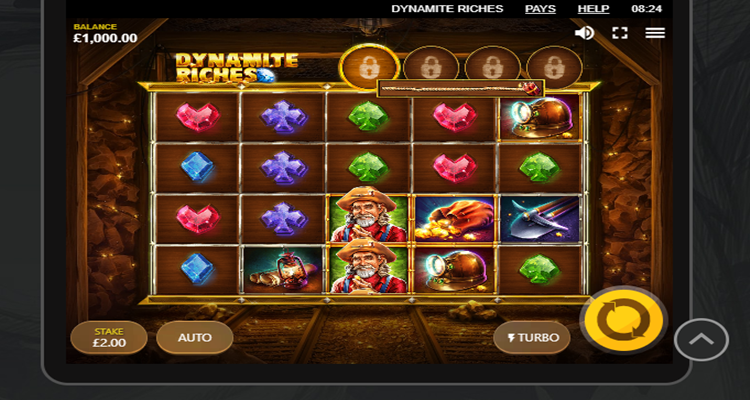 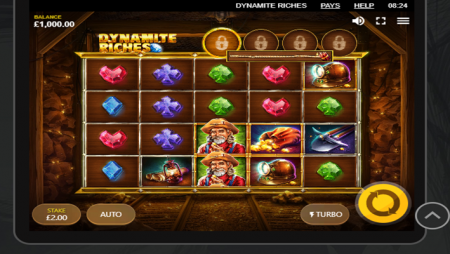 Once you load the new title, you will find yourself deep within a gold mine. The walls are filled with rock with glimmers of gold throughout. On the reels, players will find diamonds, spades, clovers, lantern and map symbols along with a pickaxe and shovel, plus a wild.

As you play, collect dynamite wilds. Once enough have been collected, a fuse will be lit and unlock four special features. One feature is removing low paying symbols. Blast away the low paying symbols to earn only high paying ones! Another option is the Random Wilds. Shake the mine to earn random wilds in the slot game that help to create winning combinations.

Multipliers can also be won during play. The compass will appear on the grid and show you the way to earning big multipliers on the reels! Mega Wilds can also be earned. Uncover 2×2 and 3×3 wild super symbols to earn big wins!

According to Red Tiger Gaming…

Dynamite Riches also includes Gold Spins. The Gold Spins symbols can appear on any reel. Three or more of the symbols anywhere in the game will provide the Gold Spins bonus round. This round adds an extra element of excitement to the reels.

Just before the release of this game, Red Tiger Gaming announced two new partnership deals. It signed deals with ComeOn and Videoslots.com. The software developer now offers games via both operators, providing players with a ton of top-quality content.

More about:  CloudBet.com heralds the return of UFC with the new It’s Time!! video slot