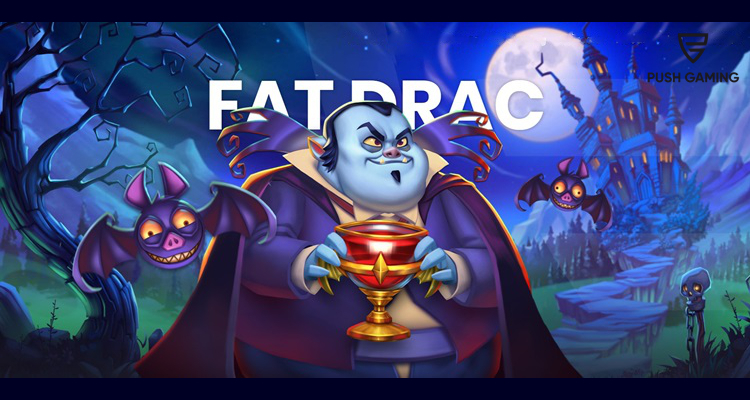 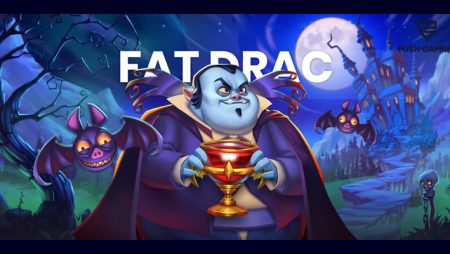 British slot games innovator Push Gaming has released its vampire-themed, Fat Drac, which promises to deliver an experience you can really sink your teeth into, including a 50,000x max win!

Game three in the supplier’s wildly successful “Fat Series,” following Fat Rabbit and Fat Santa, the 5-reel, 5-row video slot with 40 paylines puts a unique twist on a classic theme and hits the market just in time for Halloween.

Fat Drac is a highly volatile game that transports players to Transylvania where a spooky castle is perched high atop a tall narrow spire of rock and our cartoon-like nosferatu gorges himself on goblets of blood.

Spades, diamonds, hearts and clubs card suits comprise the game’s regular paying symbols, while a well-worn set of dentures under a glass dome, a parchment scroll with blood ink quill, a skeleton with a monocle and man with a handlebar moustache are the highest paying symbols. Landing three or more matching symbols on adjacent reels starting from the leftmost reel creates a winning combination while five or more premiums is worth 5 to 25 times the stake.

More about:  Joe DiMaggio and the Magic of his Legendary Play for the New York Yankees

Here, the golden skull serves as the game’s Wild symbol, replacing any regular pay symbol, while the Fat Drac symbol acts as a Reveal and Scatter symbol and when it lands can show either pay symbols or adorable bat symbols. The latter sees the bat flitter across the reels to an instant prize bubble, which awards players with the attached value. The extra games round is triggered when the Fat Drac symbol lands on the reels along with at least one goblet.

Instant prize bubbles can be found in the base game and the extra games round and can result in multipliers that range in values from 1x all the way up to 50,000x the bet. There are seven total prize bubbles, which display instant prizes, located to the left of the reels and nudge a position with each spin. Fat Bat symbols can land anytime, allowing all prize bubbles displayed to be collected. Extra spins are awarded every time a level increases.

Playable on desktop, mobile and tablet devices and created using HTML5 technology, the game is offered in portrait mode, which caters to handheld devices making the most of the screen for an enhanced user experience.

“We’re looking forward to the latest release in our Fat series. Fat Drac is another game with our typical awesome production values, and has an even fatter selection of engaging features!

“In time for Halloween, but relevant any time of year, Fat Drac is full of random rumbles and mischievous bats which add a real depth to the theme and overall gameplay.”

The London-headquartered B2B supplier has had a hugely successful year, having been shortlisted in four categories at the EGR B2B Awards 2021 and most recently inking a content integration deal with full-service platform provider, White Hat Gaming. The deal sees Push Gaming’s full suite of games, including the latest player-favorite titles such as Booty Bay, Mount Magmas and Jammin’ Jars 2, made available to the Malta-based operator.

A top supplier in the industry, Push Gaming is live across most of the key regulated markets throughout Europe with the likes of The Rank Group, Entain, LeoVegas and Casumo.