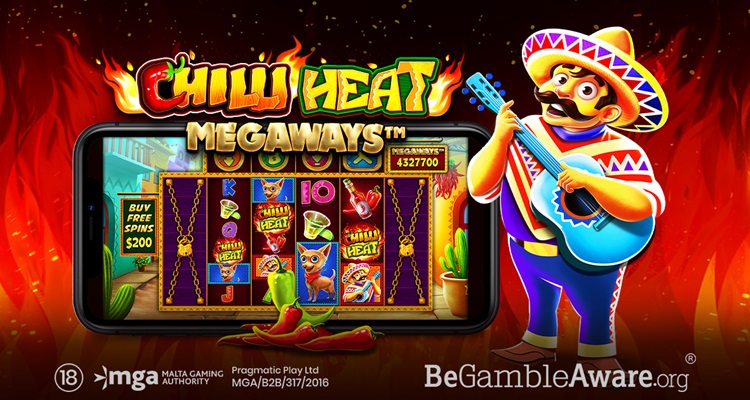 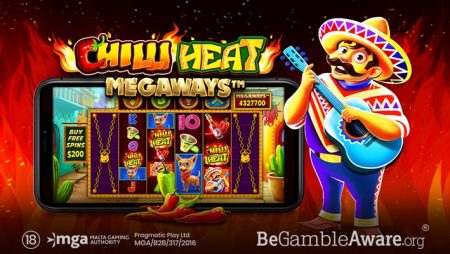 You’ll be saying “ole!” when you feel the heat of developer Pragmatic Play’s latest slot titled, Chilli Heat Megaways, a spicier version of the festival-themed original released in January 2018. So, put on your dancing shoes and get in on this Mexican fiesta for a chance to score wins of up to 5,000x the bet!

Fans of the first iteration can expect tighter graphics, a more pronounced background setting, a larger game grid, with 6 reels and between 2-8 rows, and up to 200,704 paylines, in the upgraded video slot. The soundtrack and default RTP have pretty much remained unchanged, with the latter hitting at 96.5 percent, while the volatility gets boosted to high.

Playable on any device, most of the game’s symbols will look familiar, with 9-A card icons as the lower pays, followed by a salt-rimed tequila shooter with lime wedge, a bottle of hot sauce, a bright-eyed Chihuahua, and a guitar-playing mariachi man comprising the premiums. Filling an entire reel with six premium symbols earns 1.5 to 10 times the stake.

The game’s logo serves as the Wild, and while they aren’t worth anything on their own, they substitute for all regular pays and help boost the win, as does the Tumble mechanic, which replaces winning combinations with new symbols.

As with all Megaways titles, the game’s main feature centers on the re-spins where each tumbling win sees a multiplier increase. Landing at least six money bag symbols triggers the re-spin feature. They can appear on any of the main reels and contain modifiers that carry into the round.

The modifiers have locks, which enable players to unlock additional reels and arrows that allow them to increase the size of the reel situated immediately below so that seven symbols are displayed. Whatever value is attached to the money bag symbols at the end of the re-spin round gets added to the total payout.

Players can also choose to access bonus buys via the buy respin feature, with 100x the base bet delivering a spin that will trigger the respins feature. There is also an Ante Bet feature, giving players who choose the option the opportunity to double their chance of activating the re-spins mode. The cost of opting in is 25 percent more than a base bet.

Declaring that the original version of Chilli Heat Megaways “went down an absolute treat” with their players, Yossi Barzely, Chief Business Development Officer for Pragmatic Play, said, “it felt like a suitable time to give it a repurposing.”

…they are “thrilled” with how the festive theme, innovative mechanics, and refined graphics of the game all come together to “bring something entirely new” to their portfolio and they hope that it is “well received” by their players.

The new video slot joins the Gibraltar-based multi-product content provider’s expansive stable of slots and follows the Ancient Egypt-themed Rise of Giza Powernudge, which incorporates the firm’s new high-tech mechanic for the first time, and other recent releases Fruit Party 2 and Lucky, Grace and Charm.