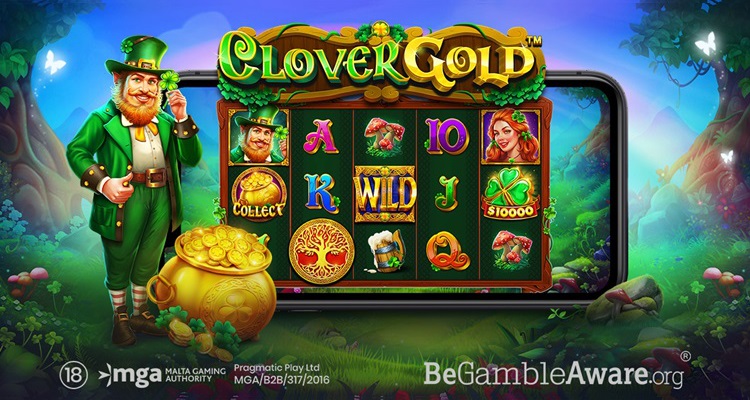 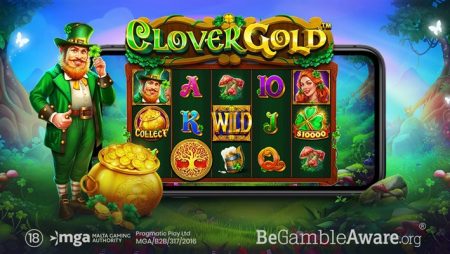 Even though St. Patricks Day has come and gone, there’s always room for another Irish-themed online slot, and Pragmatic Play’s latest release Clover Gold complements other recent journeys to the Emerald Isle, such as Rainbow Gold and Gold Party, and brings with it a 5,000x max win.

During this particular medium volatility trip to find a pot of gold, players will find a lush green meadow under a bright blue sky where a 5-reel, 3-row, 20-payline game grid is filled with J, Q, K and A card values as the lower pays and wild mushrooms, a wooden tankard of frothy beer, an Irish lass and a leprechaun are the higher pays.

As is the norm, symbols pay from left to right on adjacent reels, starting from the far left reel, with the card icons paying 2.5x the bet for five-of-a-kind and the higher pays are worth from 3.75x to 12.5x for the same run of five. The gold framed Wild symbol appears on reels 2 through 5 and substitutes for all symbols except for the Bonus Money Symbol and Collect.

Serving as the Money Symbol is the four-leaf clover, which appears on reels 1 through 4, and on each spin takes on a random value. If Money Symbols hit at the same time as a Collect Symbol lands specifically on reel 5, the Money Symbol values are awarded.

There are five types of Collect symbols, including Collect, Extra Collect, Multiplier Collect, Expanding Collect and Re-Spin Collect, and they can land with other exciting features attached that are able to activate various modifiers. These include money being added to clovers prior to collecting the win, wins are multiplied, the number of clovers is expanded, and triggering a respin.

Players who are lucky enough to land three scatters will find the free spins round launching and eight free spins unlocking. Located above the reels, a progressive meter is divided into three sections, hitting four of the collect symbols sees one section of the meter filled and eight additional free spins unlocked and an increasing multiplier that is to be added to any and all wins.

“Clover Gold™ will build upon a fan favourite theme of leprechauns, whilst introducing augmented features previously warmly received throughout our portfolio.

“Our talented team have created a fun, colourful and immersive game that has the ability to award our players a huge 5,000x max win, we are all excited to see the reception Clover Gold™ receives upon release.”

As mentioned, the multi-product content provider’s latest video slot adds to its other Irish/Leprechaun-themed hits, such as Rainbow Gold and Gold Party, and earlier hits Emerald King Rainbow Road, sequel to Emerald King, and Wild Wild Riches – Luck of the Irish.

More recently, Clover Gold follows the Ancient Egypt-themed Eye of Cleopatra, Chicken Chase and the mining-delight Drill That Gold. All of these and many more are home among Pragmatic’s diverse slots library of more than 200 titles.