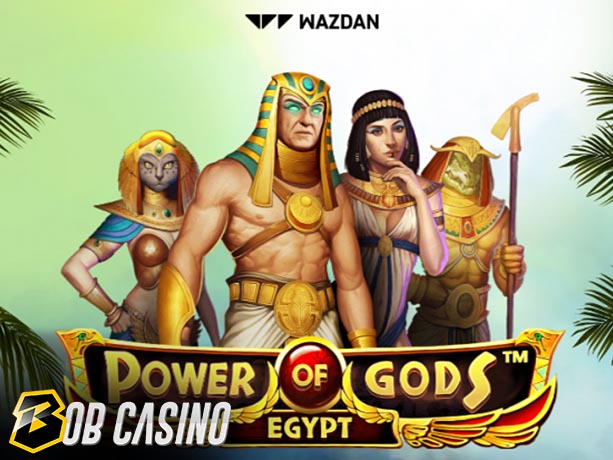 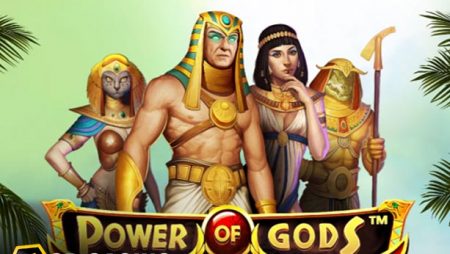 Malta-based developer, Wazdan, heads to the pyramids of Egypt for the second Power Of Gods™ installment. This comes about a year after the first, which despite spectacular graphics, failed to impress most with its uninspiring potential of 1450X. Will Power of Gods™: Egypt suffer the same fate, or has the developers stepped it up this time? There is only one way to find out!

It has been a long time coming, but the follow-up is finally here. Play Power of Gods™: Egypt for real money here or enjoy a free demo below:

With a title like Power of Gods™: Egypt, it isn’t hard to guess where you will land once the game has loaded. The 5-reel grid structure sits at the top of a stepped pyramid, guarded by one of the featured deities at the side. Palm trees wave in the backdrop as a soundtrack straight out of a core ancient Egypt movie meanders away, producing a calming effect as you prepare to dine with gods and goddesses.

Players can try to befriend the deities with bets ranging from 0.10-100 units on any device. Pretty rare, that is still possible on a weak internet connection, provided that the player switches to ultra-lite mode. Also customizable is the volatility, where players can toggle between high, low, and mid volatility with the chili-shaped volatility selector. That is just pure genius, with all the credit going to the Unique Wazdan Features that ship with each of their releases.

Power of Gods™: Egypt utilizes a 243 Ways-to-Win format. That is a welcome change, which together with the above-average Return to Player of 96.19%, should make landing wins a piece of cake. Besides, such a format guarantees life-changing potential, which the developer caps at a hard-to-believe 8000X here. A massive improvement there as Power of Gods™: Pantheon had a potential of 1450X as mentioned in the introduction.

The regular symbols start with J-A card royals, followed by two mid pays- Anubis and Ra. The last three are a bird and a male & female deity, all of who join up to deliver the paytable’s premier prize of 20X. There is also a scatter and wild, both of which pay on top of being special symbols.

The deity guarding the playing area is Ra, the god of the sun, order, kings, and the sky. He holds on to a stone tablet, where up to seven scarabs can be collected from the grid on consecutive spins.

Collect all seven scarabs to unlock seven Ra spins that are sure to excite with their X7 modifier. Regular wilds are also replaced by Ra’s wilds, which expand and shift on each spin until they are out of the grid.

Up to three free spins modes can be unlocked depending on the number of scatters collected. Sobek, Isis, and Bastet free spins require three, four, and five scatters respectively. A +3FS symbol can appear on any mode to add a total of three rounds on the house to the free spins tally.

The god associated with the West African Crocodile stars in 15 free spins. Reels shift one position to the right whenever there is a win as new symbols appear on the first reel. This continues for as long as there is a winning combination, with each shift increasing the multiplier from X1 to X7 in +1 increments. All Wilds appearing here carry an X2 modifier.

The goddess worshipped in the form of a cat in ancient Egypt presents ten free spins here. Multi-level wins come to life, meaning that all symbols involved in a winner will vanish to be replaced by new ones. Pretty much what happens in the avalanche mechanic, with each tumble resulting in a multiplier increment. What’s more, all wilds appearing in this mode will carry an X4 modifier.

Osiris alias the judge of the dead sits on the gamble feature bench. As is always the case, you either make a profit out of a rounds win or lose it all.

Power of Gods™: Egypt- Our Verdict

Like its predecessor, Power of Gods™: Egypt is laden with features. It, however, emerges superior, thanks to a 243 ways to win format that puts wins of up to 8000X within reach. Sure, the chances of walking away with that are slim to none but optimistically speaking, the possibilities of getting very close to it are there. For now, that is enough reason to keep spinning as you await the third installment to bounce off Wazdan’s radar.