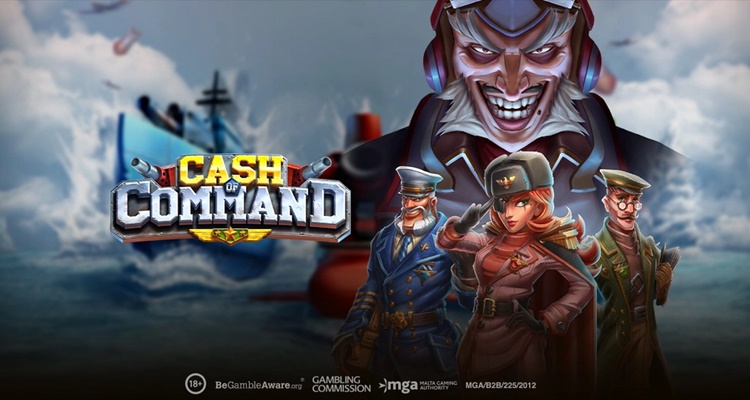 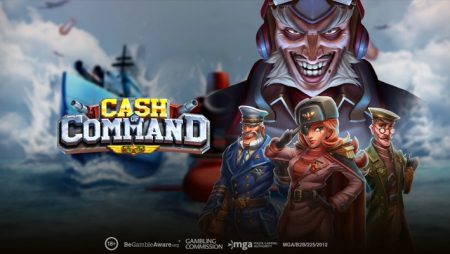 Hot on the heels of its “landmark moment,” entering the U.S. online casino market for the first time, Swedish gaming entertainment supplier Play’n GO has launched its latest slot title, Cash of Command. This battle of the sea and skies sees players lead their fleet and command their admirals as they attempt to outmaneuver their adversary without landing in enemy waters.

Players will need to land clusters of at least five adjacently matching symbols to earn a win, and when they do, the winning cluster will be removed from the grid, allowing symbols to fall down and fill the empty positions. The cascade feature repeats for each new winning cluster created, aiding in realizing the x5336 max win target.

As for the game’s symbols, in ascending order are green, brown, blue, purple and white military rank insignia, along with similar looking insignia in blue, green and red gem form. A winning five-symbol cluster pays x0.1 – x1.6 the stake, while winning clusters of 50 or more symbols are worth x100 – x5,000 the current bet.

Non-winning spins can see the Baron’s Turrets feature randomly activated. If that happens, wild symbols appear on the board giving players another chance to score a winning cluster. “W” wilds substitute for all pay symbols.

The Naval Hero feature is related to a four-level meter that sits to the left of the grid. For each level attained – by collecting 15, 40, 70, or 110+ symbols –  a different effect is triggered. The first, second and third levels are Naval Heros features and add either a ship or a submarine to the grid. Neither of them are wild, nor are they worth anything. When the cascading ends, whichever level is achieved, triggers the corresponding modifier:

Players who are lucky enough to reach the fourth level by collecting 110 or more symbols in the same round, activate theBaron Fusco feature. As a result, all ships and submarines except for one are removed from the grid. The one remaining vessel activates a super version of whichever Naval Hero is associated with it:

The Naval Heroes and the Baron Fusco feature only trigger once per game round.

‘Everything from the way the features play out on the grid to the visuals in the game, Cash of Command is a shining example of why Play’n GO games stand out in the industry.

‘Our commitment to entertainment is in every ounce of what we create and that’s evident more than ever in this in this creative grid slot.’

The new release, which follows the Ancient Aztec-inspired title, Rotiki, is on the heels of the supplier’s entry into the U.S. online casino market after securing a Provisional Internet Gaming Supplier (B2B) license in the state of Michigan.

Courtesy of the B2B license, Play’n GO will be able to introduce its unmatched collection of slot titles to regulated jurisdictions across the country, starting with the Wolverine State where players could very well be the first in the U.S. to experience games such as Reactoonz, Rich Wilde and the Book of Dead, Legacy of Dead, Rise of Olympus, and many more.

According to the Växjö-headquartered firm, securing a license in Michigan is the first step in becoming the “partner of choice” in the U.S., while it also targets launches in other regulated states.

Declaring the move a “landmark moment,” in the history of the company, Chief Executive Officer for Play’n GO, Johan Törnqvist (pictured), said…

“We started by designing casino games specifically for mobile before the smartphone even existed, and now are breaking into America as the leading supplier to more than 25 regulated markets globally which is such a credit to everyone at Play’n GO. We believe we are uniquely positioned to succeed in the US.”

Törnqvist added: “Our aim is to see Play’n GO games become as beloved in the US as they are in every other regulated market around the world. We know that each regulated market is different, and that this will take time in the US, but we are absolutely committed to expanding our footprint across the country.

The CEO explains that by focusing on the player and creating games that entertain above everything else,” they have become a leader in regulated markets. And they believe this gives them “an edge” in the U.S., but they’ll “be taking nothing for granted and look forward to listening, learning and adapting so we can provide the very best casino entertainment to US players.”