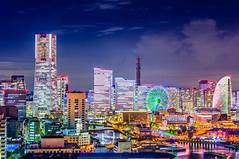 Following the election of a new mayor, the Japanese city of Yokohama has officially cancelled the casino resort bidding process.

The abandoning of the quest and campaign for a major casino resort in Yokohama had been on the cards for some time, but the election of university professor Takeharu Yamanaka as the new mayor made it a virtual certainty. His campaign was based upon an anti-casino ticket.

One of the main candidates for the licence to run the resort, Genting Singapore, has gone on record this week as registering its surprise and disappointment with the outcome.

The company said in a statement: “Our board and consortium partners have devoted considerable time and our best efforts to prepare and submit a compelling bid and proposed a significant investment that will benefit the city and its community and at the same time make Yokohama a world-class tourism destination.”

More about:  IGT only gaming company finalist in 2020 CRRA

The consortium included Sega Sammy Holdings, the major Japanese gaming company and others. The other main bidder for the resort contract and licence was Melco Resorts and Entertainment, which announced its pulling out yesterday.