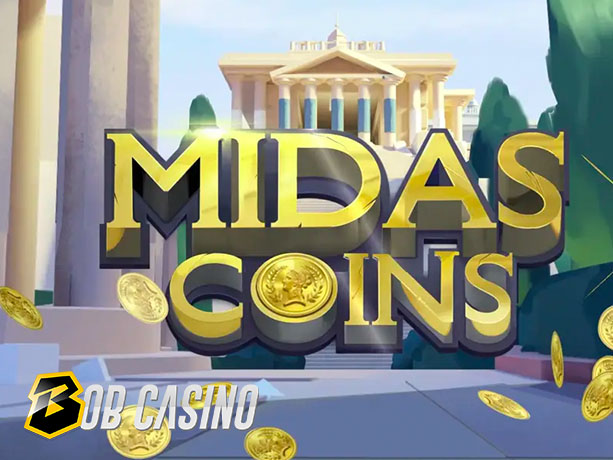 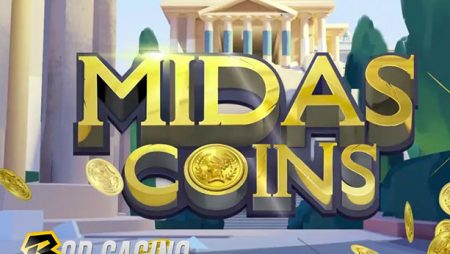 Like Pragmatic Play, Kalamba, and Thunderkick, developer Quickspin hops on the legend of Midas. Just a recap, Midas was the not-so-wise king of Phrygia, Asia Minor, who wished that he could turn everything into gold by just touching it. The wish was granted to him by a god named Dionysus, but he later realized that he had not given it much thought. Everything he touched, including his beloved daughter, solidified into gold instantly. It is at this point the developers at Quickspin come in, advising you that it might be a curse for him, but a blessing for you!

Time to collect that gold! Play Midas Coins for real money here or enjoy a free demo below:

Launching Midas Coins, players find themselves in the well-tended gardens that surrounded the palace of King Midas. It is where Silenus, Dionysus’ satyr was left behind, but that’s a story for another day. For now, let’s focus on the main area, where players can place bets ranging from 0.25 to 100 units of the main currency before setting the reels in motion.

Landing winners is possible on any device, provided that it supports internet browsing. That can be on any browser, including Edge for those who still take Microsoft recommendations seriously.

Midas Coins is as conventional as they get when it comes to the rules. Winners are comprised of three or more identical symbols lined up from left to right. As for the symbols themselves, there are both lows and mediums, both of which can be substituted for by the Marigold Wild, which is also a payer on its own. (Marigold was the king’s daughter). While lows are represented by blackjack icons in Greek alphabet style, the mediums include a pendant, ring, bracelet, and necklace. The last-mentioned is the most valuable with the rewards of up to 32x.

As promised by the developers at launch, Midas Coins is among the friendliest of them all, with its medium volatility-driven algorithm that brags an above-average return to player of 96.02%. Also pointed out is the decent potential, which is approximately 5000x.

The man of the hour shows up on the last reel to cash all the coin values in view. Coin values can range from 1x to 500x the bet.

One, two, and three scatters landed during free spins award one, two, and five additional free spins, respectively. If you are fortunate enough to get a good hit with the bonus round, you can replay it at a cost of 50x bet. Remember, an ROI or getting back the invested amount itself is not guaranteed. Also, the buy feature is limited to some jurisdictions.

More about:  Big Time Gaming releases new online slot Who Wants To Be A Millionaire Megapays

You saw what Quickspin did there? They played it safe with a well-known collect mechanism while bolstering their offering with a potential boost and a friendlier algorithm. That said, Midas Coins will be perfect for anyone who’s looking for a new slot to add to his/her go-to slots in the money/coin collect category.