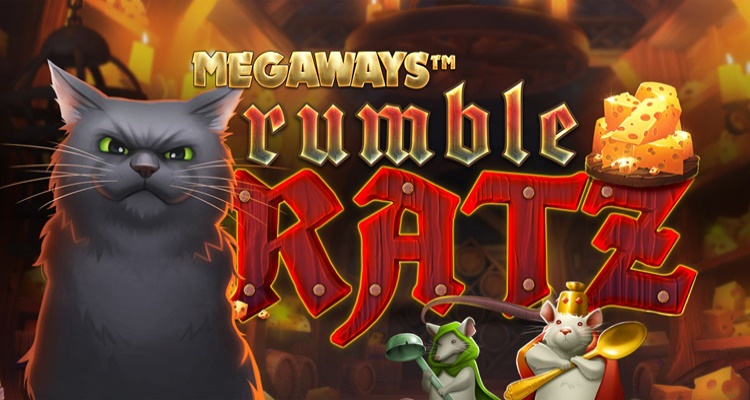 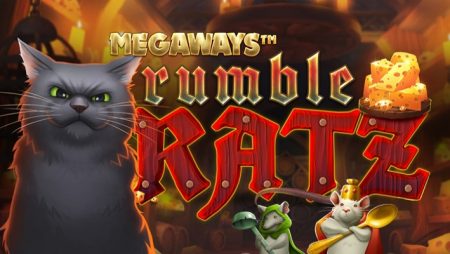 From brats and beers to rats and cats, Kalamba Games has taken that giant leap with its latest online slot title, Rumble Ratz Megaways. Billed as its “first premium Megaways™ title,” the game transports players to the Middle Ages where a band of adorable rats tries to outwit a cat in search of large stores of cheese and a max win of around 5,000x!

While it was powered by Relax Gaming and released with little to no fanfare, technically, the sci-fi-themed Machina Megaways slot was the first title from Kalamba to incorporate the popular game engine from Australian software developer Big Time Gaming (BTG). The Malta and Krakow-based game studio signed an agreement with BTG for the license back in May.

Anyway, back to the business at hand. Rumble Ratz Megaways is set in a quaint old English kitchen where you’ll find various light sources such as candles, lanterns, a stone fireplace and a cast iron stove, along with hanging pans, barrels, and a growling feline that pokes its head up around the game panel keeping watch. There are also wedges and bits of K-Cash cheese symbols on round cutting boards positioned atop the playing board.

Highly volatile, the video slot has a 96.7 percent RTP (with HyperBonuses) and the each of the grid’s 6 reels hold 4-6 symbols, providing 4,096 – 46,565 win ways, thanks to Megaways mechanics. Playable on all devices, regular wins are paid by landing matching symbols in any position on adjacent reels from left to right. Bets range from 25 p/c to £/€37.50 per spin.

As for the paytable, the game’s lower value symbols are 9-A card ranks and are worth 2-2.6 times the bet for six-of-a-kind, while five different rat characters each with its own cooking paraphernalia comprise the premiums, paying 3-5 times the stake the same way. Made of cheese, WILD symbols land on reels 2-5 during base gameplay and 2-6 in free spins to help form winning combinations. They can take the place of all other symbols with the exception of BONUS and K-Cash symbols.

With Megaways, when a K-Cash symbol lands, the size of the reels may increase, which also boosts the number of pay ways that are available, resulting in even more chances of landing a win. The value of these wins is accumulated and added to the corresponding K-Cash meter situated above them.  During the base game, a reel that is 6 symbols high and has a K-Cash Reset symbol land on it, the cash is awarded, and the reel resets back to four positions.

Landing at least three bonus/scatter symbols awards the coveted Rumble Ratz free spins round/ 2.5x, 6.25x, 12.5x, or 18.75x the bet, along with three respins. The reels are set to 4 rows in free spins, with multiples of the bet placed in each K-Cash meter. K-Cash symbols that land have their values added to the corresponding meter, and if the reel is not 6 symbols high, one blocker is removed.

Free spins reset to 3 whenever a blocker is removed. Any time a reel grows to six rows high via the K-Cash feature, the bonus round can be triggered. When free spins end, the K-Cash meters are added, and the multiplier is applied to the total.

Furthermore, depending on the jurisdiction, there are three HyperBonus options for players to choose from, and paying 60x, 100.4x, or 140.6x the bet will instantly unlock the bonus round and three free spins with K-Cash multipliers up to x4, x7, or x10, respectively.

More about:  The Match golf extravaganza to feature quartet of NFL quarterbacks

“With a host of engaging features, changeable reel sizes thanks to our innovative use of the Megaways™ mechanic and a huge max win of over 5,000x, Rumble Ratz MegawaysTM is sure to be a big hit with slot enthusiasts around the globe.”

Cohen adds that “the entire team worked hard to deliver a new twist on Megaways” with Rumble Ratz being “instantly recognizeable” having Kalamba’s “stamp of quailty” attached to it.