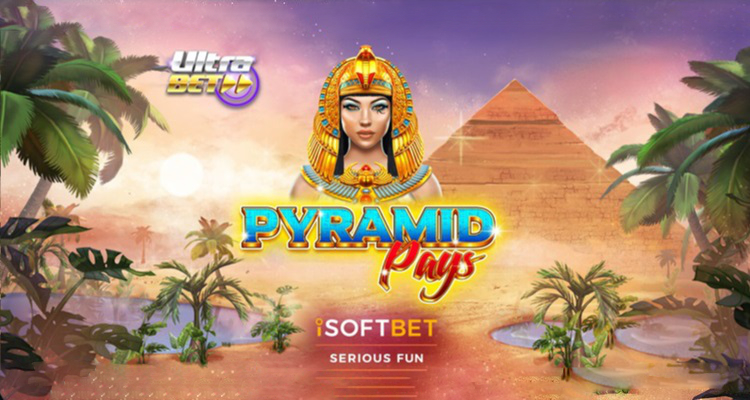 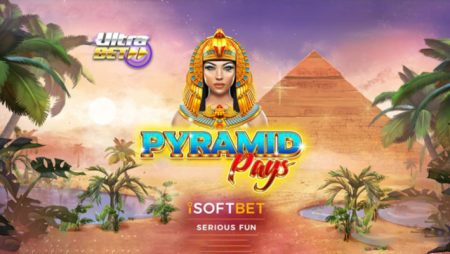 The 5-reel, 3-row, 243 payline, big win potential hit is set in Ancient Egypt where the video slot‘s game grid is flanked by golden statues of pharaohs and turquoise water flows along a canal.

A medium-high volatility game, Pyramid Pays can be played on desktop, mobile, and tablet, with wins awarded when three or more adjacent matching symbols land from the far left side of the grid. The iconic-themed game’s symbols comprise classic 9-A card icons, along with Ankhs, scarabs, Eye of Horus, Bastet, the cat goddess, and pharaohs for higher pays.

A symbol that appears to be Cleopatra serves as the game’s Wild, which lands on reels 2, 3, or 4, and only one per spin. It substitutes for any of the pay symbols with any win they are part of multiplied by x2.

The Ultra Bet mechanic can be triggered by players to play 50 games for 50x the stake. While in the mode, players can collect stars to win additional prizes such as multipliers and cash rewards.

In order to activate extra spins, a Pyramid Scatter symbol needs to land on reels 1, 3, and 5. Meanwhile, during the bonus mode, players can trigger the Pyramid Pays feature if the scatter lands on the same reels again. Triggering the Pyramid Pays mode with a booster symbol on reel 5 doubles all values. What’s more, landing a wild multiplier on reels 2, 3, or 4 multiplies and winning combination they are part of by 2x, as previously mentioned.

While in extra spins, landing three scatter activates the Pyramid Pays mode. When that happens, a cash pyramid with nine prizes sees one highlighted when the feature starts. With every instance of the feature being triggered, a cash value is selected randomly selected and awarded to the player, with the chance to win up to 3840x the stake.

In the official press release for the new game, Head of Games for iSoftBet, Mark Claxton, said…

“Pyramid Pays takes an iconic theme and adds a thrilling iSoftBet twist in our newest epic Egyptian adventure. With a Pyramid Pays feature which awards random sums to players whenever it is triggered, alongside wild multipliers and big win potential, it’s another hit that adds yet another amazing experience to our portfolio.”

Claxton added that so far in 2021, they have enjoyed “great success” with their immersive product range, and they are “very delighted” to add the new title to their collection.

The launch follows the release of iSoftBet’s latest table game, Jacks or Better, with the new feature-packed video poker innovation providing a classic five-card draw experience and a chance to win up to 800x the stake. Meanwhile, just prior the launch, the iGaming software provider was awarded a Greek license in its continuing effort to expand into newly regulating and regulated markets.

More about:  Playtech to continue to provide content for four key product verticals to BoyleSports for another 5 years