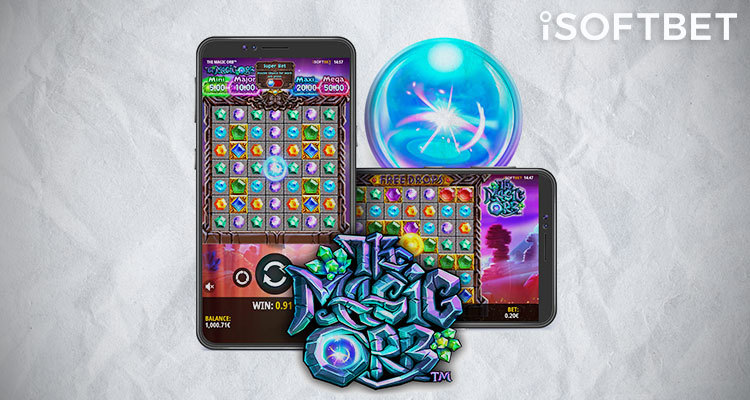 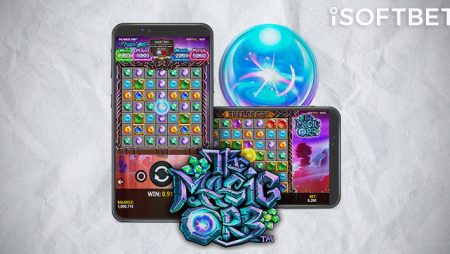 Hot on the heels of its Lottoland collaboration and market-leading online and mobile casino software provider iSoftBet has added to its fast-growing Hold & Win range of slots with its latest title, The Magic Orb. Players will find the new online slot is unique from other games in the series while being challenged to capture the power of the mysterious gems.

This high volatility, cluster pays slot plays on a 7-reel, 7-row game panel surrounded by a pastel haze of colors and rock formations, and at the center of the reels sits a magical Orb that can fire on any spin. While it does not cascade, it can either randomly activate on any spin to reward players with one of four modifiers or trigger one of two exciting bonus rounds, Free Drops and Hold & Win.

Forming winning combinations is done by landing at least five of the same symbols in just one cluster either horizontally, vertically, or a combination of both. Of the eight total gem symbols used in the game, those with gold borders are the most valuable, awarding significant multipliers worth 500x the player’s stake when a winning combination of 15 or more of the top-paying purple gems land.

There are two separate ways to trigger the Hold & Win Respins bonus feature; either by the Magic Orb or by landing at least five Scatter symbols anywhere on the reels. Players are awarded three initial respins each time this bonus is triggered, resetting to three whenever a new symbol lands.

During the feature, at least one of the Mini, Major, or Maxi Pot Prizes, worth 25x, 50x, or 100x, respectively, is “guaranteed to be triggered.” And if some lucky player manages to fill the entire pot, they will be awarded the Mega Pot prize which is worth 250x.

Meanwhile, players can be awarded the Free Drops feature if they land three Bonus Scatter symbols anywhere on the grid or as one of the Magic Orb awards. A progressive multiplier is included during Free Drops, and increases by x1 after each cascade. The Magic Orb can also award one of the four modifiers during the bonus round.

In a company blog, Mark Claxton, Head of Games for iSoftBet, said: “Following on from the glitz and glamour of our previous releases, The Magic Orb is a shining example of the innovative experiences that we at iSoftBet are known to produce.”

Claxton went on to say that they are “always searching” for new ways to “bring added value” to their portfolio so that they are able to “fully engage” their players, and by “utilising an assortment of popular mechanics and features in this game, we feel we have definitely achieved that goal.”

The mystical-themed title adds to the game developer and aggregator’s expansive slot library, which is led by Megaways and Hold & Win titles, including the recently released Gold Digger Megaways and the player-favorite Brilliant Diamonds: Hold & Win.

Just prior to the new slot launch, iSoftBet, announced that it had extended its successful business relationship with Lottoland, having designed a unique, exclusive slot for the leading lotto betting operator.

The Gibraltar-headquartered operator’s 15 million customers gained access to the title, Lottoland Megaways, on March 14th. The result of the collaborative effort is reportedly part of the brand’s strategy to provide its players with bespoke gaming experiences.

Commenting on the specially-designed game, Mark Claxton for iSoftBet, said…

“Creating exclusive slots for a brand is a real statement of faith in our abilities to develop iconic content, and we are very proud to have developed a Megaways™ slot that represents Lottoland.”

Claxton adds that the Lottoland collaboration was “an exciting project” and they are “thrilled” to be able to launch what they think is “a hugely exciting game that clearly outlines their brand in a slot format.”

“Designing and delivering a flagship game for our brand is something that has required a lot of trust and we’re delighted that iSoftBet has gone above and beyond for our very own Lottoland Megaways™.

“The team’s attention to detail and enthusiasm has shined throughout the project and we can’t wait to see how our loyal customers react to our very own title.”

The branded slot, which demonstrates iSoftBet’s skill at developing Megaways titles and further expands the fruitful relationship between the two firms, marks yet another milestone for the British game’s developer and aggregator, which recently inked another strategic deal with Flutter Entertainment’s PokerStars. That, in addition to a series of recent agreements further expanding its presence in Latin America.