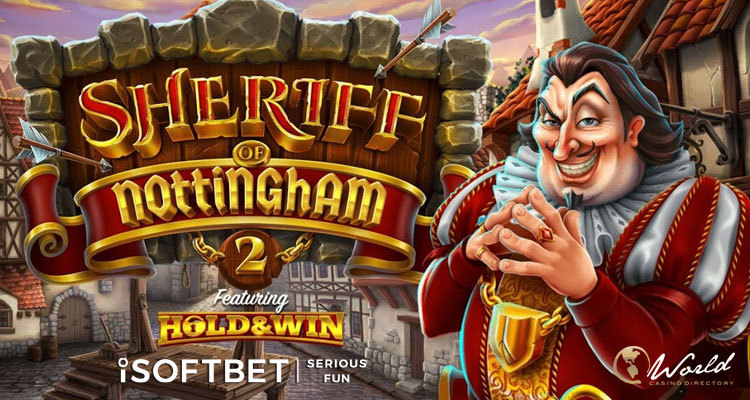 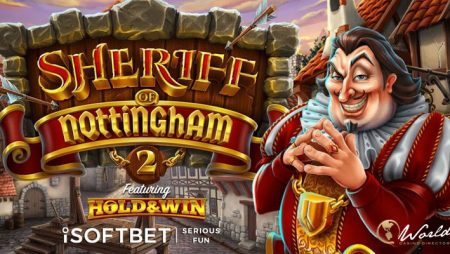 Beloved Sheriff of Nottingham is back – but this time in an improved version, with many new features that will make playing even more exciting and fun. Sheriff of Nottingham 2 is the most recent slot release of iSoftBet, the company whose mission is to create a unique gaming experience by creating new, thrilling games.

In this 20-line game, players will join the Sherrif himself in his journey, on which he will be followed by Robin Hood and other members of Merry Men.

This game is placed on the roads of an old, muddy English city, where Robin Hood will reward players with extraordinary in-game modifiers and the Sheriff Respins bonus. These features have been designed in order to increase the chances of winning fantastic prizes.

The player needs to face the highly-skilled archer who will appear on any base game spin and offer three scrolls. Which scroll to choose? It’s up to the players, but they will award one of six possible outcomes.

The major symbol in the game is, of course, the Sheriff. He is actually the Wild during the base game. His duty is also to collect every cash symbol during respins. The gold armor symbol also matters – you can get up to 25x the bet for five-of-a-kind if you achieve this symbol.

Hold & Win Respins round can be triggered by landing three Bonus symbols. It awards the players with three spins at the beginning, but it resets every time the player achieves the new symbol.

Here the player can find one of Merry Men – during this round, the mystery symbol can be achieved and transformed into one part of the crew.

The crew members are unique – each one is different, and each can actually have his role in the game. Will Scarlet can open the locked reel on the right side, and on the left side, Friar Tuck can also open a locked reel, while Little John has a possibility to increase all prizes in view.

You can even get extra lives by achieving Maid Marian. But the star is Robin Hood – he is able to increase the value of all the prizes nearby.

In Hold&Win, you can also achieve the Sheriff, whose task is to collect all values nearby to lock up Merry Men and free the tiles. If the player succeeds in locking away all of the crew members, all their winnings during this round will be multiplied by five.

A game players will love:

Mark Claxton, Head of Games at iSoftBet, said: “At iSoftBet we are well known for our imaginatively themed slots, as well as our ability to return to popular experiences to deliver exciting series that add considerable value to the original games.

“Offering several in-game modifiers that multiply the excitement and wins on offer, we expect this new release to go down a treat with our audiences – especially those familiar with Robin Hood and his faithful following of bandits.”