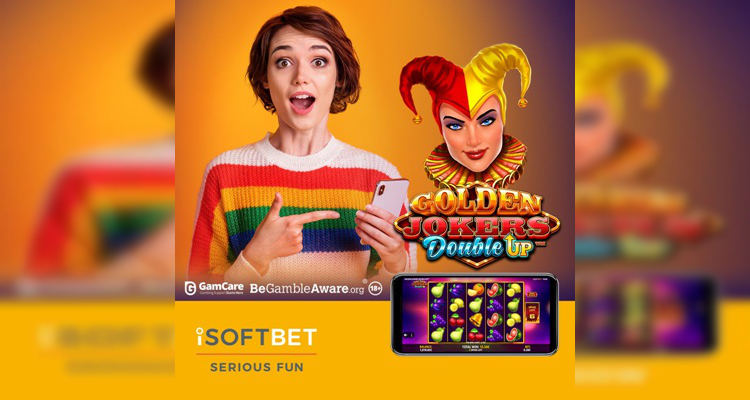 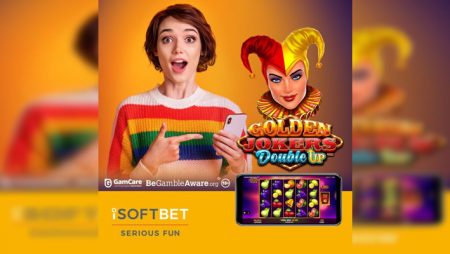 Players are now able to access the latest hit slot title from iSoftBet after Golden Jokers Double Up went live across the leading online games supplier and content aggregator’s network. The new video slot has a retro vibe, with its 5-reels and 4-rows filled with color-saturated fruits and old-school 7s while players try to land lucrative wild multipliers and three jackpots.

You’ll find that the medium-high volatility online slot provides 1,024 win ways, a 96.0 percent RTP and includes a special Double Up option, which doubles the Scatter symbol’s size, increasing the chance of the feature being triggered.

In order to earn wins, players will have to land three or more matching symbols on adjacent reels from the far left side. Lower paying pears, watermelons, plums, lemons, oranges, grapes, cherries, and higher-paying red and blue 7s, a classic bell and a Golden Joker comprise the game’s symbols, which pay between 4x – 15x the bet.

Wild symbols can land on reels 2, 3, or 4 and can substitute for any regular paying symbol. Only one wild symbol can land per reel. The Golden Joker is the most valuable symbol in the game and offers bigger payouts when it is stacked in the free spins feature.

Triggering the Bonus Wheel happens when you land three, four, or five diamond Scatter symbols anywhere on the reels. Doing so awards one, two, or three wheel spins, respectively. While at the bonus wheel, players can win 4, 6, 8, 12, or 20 free spins, the Mini, Major, or Grand Jackpot, which are worth 50x, 100x, and 500x the bet, respectively

What’s more, any wild that lands during the free spins round randomly transforms into Wild Multipliers, with each worth 2x or 3x, with those also multiplying the other by up to 27x. Also, if two, three, four, or five scatters hit during the bonus round, players are awarded 5, 8, 15, or 20 additional free spins.

In a company blog, Mark Claxton, Head of Games for iSoftBet, commented on the new game: “Golden Jokers Double Up brings innovation to a classic theme, delivering a modern take and elevating the traditional slot experience.

“In addition to the fruity fun, this latest release provides Free Spins, Wild Multipliers and a lucrative Bonus Wheel to deliver a slot experience that suits all player preferences.”