Global Gross Gambling Revenue Has Fallen by Billions, Thanks to COVID-19 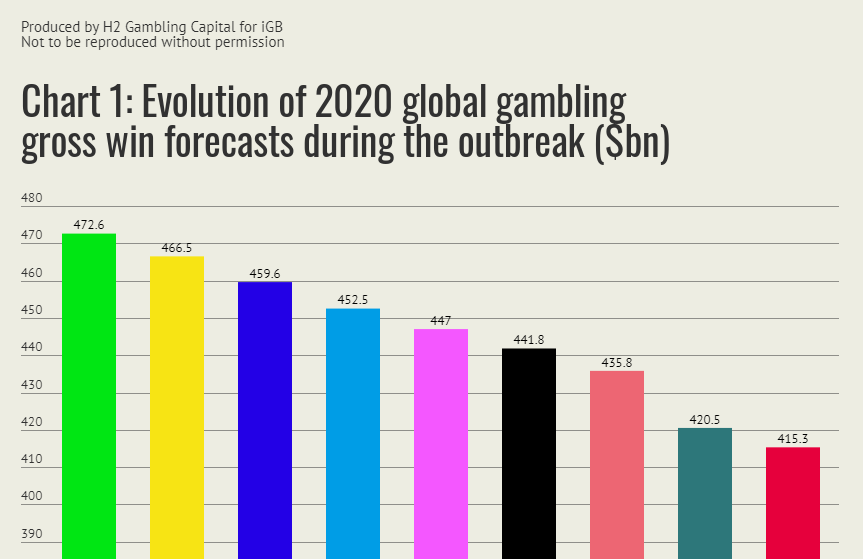 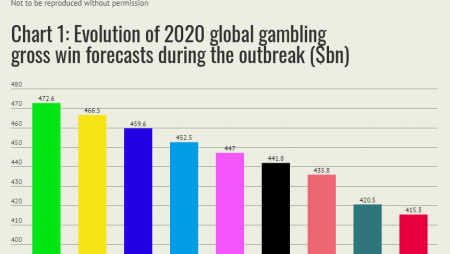 The H2 Gambling Capital for iGB released 8 charts that visually represent the changes in international gambling revenue, as well as updated projections.

The first chart showed the gross win forecasts before and during the COVID-19 outbreak. Before the virus began to spread globally, expert analysts predicted that the global gambling industry would rake in over $470 billion in 2020. Come mid-February, that figure had dropped to $459.6 billion. When March hit, the estimate plunged even further to $441.8 billion.

The most recent date on the chart was March 27th, and its forecast was $415.3 billion in 2020 global gambling revenue. Altogether, the prediction has dropped by roughly $55 billion.

The second chart illustrated the downgrade of global gambling revenue forecast percentages over the last two months. At the beginning of February, gross win predictions had declined by 1.3%. On March 5th, the percentage had fallen to -6.5%. The March 27th sits at -12%.

More about:  Intertops Poker to highlight Betsoft’s Tower of Fortuna this week with extra spins deal

H2’s third chart covers the same topic as the previous one, except the gross win forecasts are regarding Asia and Oceania. This region of the world has fared worse than others. In early February, the forecast was -3.2% under the pre-coronavirus projection. By the time data was collected on March 27th, the percentage had dropped all the way to -16.40%.

The fourth chart is focused on Europe’s gross win forecast decline. The drop in percentage didn’t really kick in until February 13th, and even then it was a minor loss of 1.1 percent. On March 5th, it was still relatively low at -2.40 percent. However, as of March 27th, the forecast now shows predictions sitting at -10.10%.

Chart 5 gathers data about North America’s gross win forecasts. Similarly to Europe, there was not much of an impact in February. On February 13th, the forecast had declined by .5%, which is even lower than Europe’s loss. Come March 5th, it was neck and neck with Europe at -2.70%. On March 27th, the forecasts had dropped to -8.60 percent, which is lower than any of the other continents that H2 analyzed.

The sixth chart compiled the changes in online casino’s shares of the gross win during the COVID-19 outbreak. Before the virus began to spread globally, online venues only accounted for 13.19% of total global gambling gross win. On March 27th, data showed that the percentage had climbed to 16.10%.

Next, the seventh chart showed how global gross win forecasts have declined. Before the public health crisis, the gross win was set to increase by 3.3% over 2020. This number hit the negatives on February 2nd, at -1.1%. As of March 27th, the number is now at -9.2%.

The final chart shows how the global gambling gross win has changed since 2003. At first, in 2003, the gross win was approximately $260 billion. Over the next sixteen years, it generally rose, except with a drop in 2014. 2019 was the highest year yet, sitting at slightly above $450 billion. 2020, however, has dropped down to roughly $420 billion, which sets the global gambling industry back to about 2016’s level.

Source article:
Global Gross Gambling Revenue Has Fallen by Billions, Thanks to COVID-19