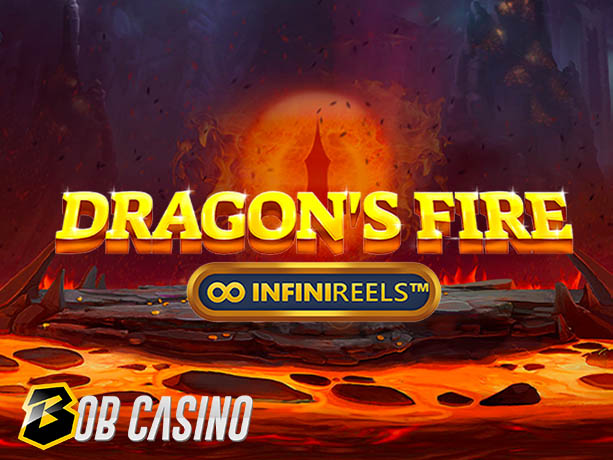 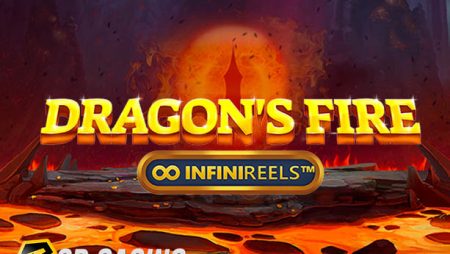 NetEnt-acquired Red Tiger takes up InfiniReels following that stalemate and eventual agreement between NetEnt and ReelPlay. For those not aware of the events leading to that last part, it just happened that the companies thought of a similar concept at the same time. While ReelPlay released their first Infinity Reels™ game, El Dorado, in November 2019, NetEnt claimed to have trademarked their version of the concept, InfiniReels™, earlier in September.

Back to the release, Red Tiger has gone for an InfiniReels upgrade of Dragon’s fire. Without further ado, let’s all brace up and head back down to the lair to continue from where we left off.

Red Tiger reworks a fan favorite with their parent company’s InfiniReels concept. Play Dragon’s Fire InfiniReels for real money or in a free demo that is coming soon to Bob Casino!

Instead of a 5×4 grid set-up, the InfiniReels version of Dragon’s Fire opens to a 3×3 formation. That’s temporary, though, as things are bound to change once the primary feature is activated.

As for the graphical alterations, expect a few rearrangements here and there, but no upgrades.  That is because the original didn’t hit the market too long ago. You can see that the dragon now embosoms the playing area instead of perching on top of it. The red egg is also left out. As is always the case with Red Tiger, the full-screen button is readily available for those who would like to immerse themselves into the gameplay.

Playable on any internet-supported device, Dragon’s Fire InfiniReels offers bets ranging from 0.2 to 10 units of the primary currency.  As indicated by the restricting bet range, the slot is extremely volatile, rated 5/5 by Red Tiger’s volatility meter.  The 95.73% RTP rating is below average, paired by a somehow reassuring 4/5 hit rate.

Winning combinations form whenever at least three of a kind connect, counting from the leftmost reel. It is like in the Megaways™ set-up, where the position doesn’t matter. That said, the symbol values are not that great, with the premier paying 1x for three of a kind. Speaking of symbols, don’t expect changes as the dragon assortment from the original slot makes a return.

This is the primary feature, triggered by every win. It sees the reels nudge to the left on the spin that follows a win to allow just enough space for an extra reel. This only stops when wins come to a halt, meaning that there is no limit to the reels that can be added (hence the name Infini(te)Reels). Needless to mention, reels reset to the default count (3) when the feature comes to an end.

As you will come to see, the goal of InfiReels is to land more of the symbols that triggered the feature. And when that happens, the initial symbol win will be granted yet again. As already mentioned, this can go on for a while leading to astounding totals.

Like in the original Dragon’s Fire slot, Eggs are generous with multipliers. Only one can land during a spin, awarding a random win multiplier that can be big as 5x.

Any new eggs (in the event of infiniReels when eggs are among the locked symbols) add to the multiplier figure. Multipliers reset when InfiniReels comes to a halt.

Probably because of the dragon’s breath, up to two reels can set ablaze and spawn wilds. This almost guarantees a win, after which you can only anticipate the named feature on the new reel, courtesy of InfiniReels.

Dragon Spins symbols are the last symbol type you should expect to see on the reels. Three of them on the default reel count trigger eight dragon spins, where only one randomly selected symbol appears alongside the special symbols, including fire wilds, fire eggs, and +2 spins symbols. The last-mentioned adds two rounds to the dragon spins tally upon showing up.

Looking for a mechanic to upgrade the original Dragon’s Fire, Red Tiger couldn’t have chosen better. Much like the BTG-patented Megaways mechanic, InifiniReels has it all, including a potential boost from an already-impressive 5000x to a hard-to-believe 10413.9x. That or something close to that can be bagged in an elusive free spins session where breathtaking wins are just about guaranteed.